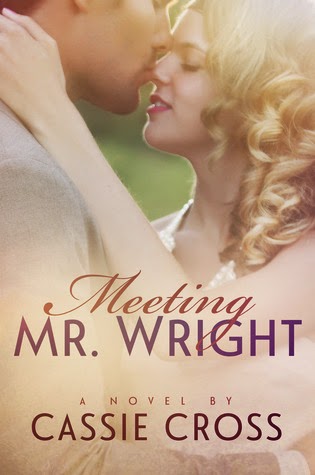 After catching her boyfriend Ethan cheating on her, Callie decides to retire from the dating game at the ripe old age of twenty-four. Unfortunately for Callie, she’s going to have to see Ethan at her best friend’s upcoming wedding. Stranded in the airport during a weather delay on her way to the nuptials, Callie meets Nate Wright. He’s sexy and uncomplicated, and a one-night stand is just what the doctor ordered for a girl with a broken heart. Callie thinks she’ll never see Nate again —until he shows up at the wedding.

Nate is hell-bent on making Callie forget about her ex, and he makes her question whether she was ever really in love with Ethan at all. As she begins to fall for Nate, Callie wonders if promises were meant to be broken…

Gabby looks at me with wide eyes as she grabs my arm and leads me to a bench a few feet away where we can talk without worrying about anyone overhearing us.

“What. Was. That?” she asks. “I was hoping you two would hit it off, but I never thought…”

I’m not really sure what to do now. I know I should tell her, because she’s my best friend and I’ve never kept anything from her. I don’t think I could keep this from her, even if I tried. It’s bound to come out at some point, and at least if I let her know now I can be the one who’s in control of it. But once I tell her about my history with Nate, I know she’ll start waxing philosophic about fate or something equally ridiculous. Gabby’s such a hopeless romantic, bless her.

“Are you kidding me?” She’s so excited that I’m a bit worried that she’s going to hyperventilate. “What are the odds of that? Holy shit.”

“I bet they’re pretty long,” I tell her. Seriously long. “But I know that look on your face, and it’s not-”

“It’s fate,” she says, clasping my hands in hers. “How can you think it’s anything but fate, Callie?”

“I can think it’s a coincidence, Gab. Because that’s what it is.” It’s a delightful, scary coincidence.

“He likes you.” She’s not going to give up very easily.

“No,” I say firmly. I don’t want her getting any more ideas or thinking that she can just bulldoze through my plans with her iron will. “You know I don’t want that.”

She rolls her eyes, but I shoot her a death glare that lets her know that I’m not kidding.

“He’s the best man and you’re the maid of honor. I paired the two of you up at the bridal party’s table and everything.”

I sigh. “As long as that’s all the pairing up you do, that’s fine.”

“It might be out of my hands. He’s super charming,” she says slyly, looking at me out of the corner of her eye. She’s always doubted my commitment to my new life goal of never having my heart smashed again by someone I stupidly fall in love with. I wonder what it’ll take to get her to believe that I’m serious.

“I think I’m aware of how charming he is,” I tell her. I mean, the man charmed my pants right off. “How come I haven’t met him before? I don’t even remember ever hearing about him.”

“You knew Ben had a brother,” she says in a not-so-subtle chastising tone.

Gabby rolls her eyes. “When was I supposed to tell you that? When you were dating Ethan or when you were swearing off men?”

“Swearing off love,” I correct her. She has a point though, I don’t try to argue that.

“Oh, excuse me,” she says, smiling. “He lives in Boulder and manages a chain of sporting goods stores, in case you wanted to know.”

“I didn’t,” I say, even though that’s a tiny white lie. I shouldn’t want to know, that’s the real issue here.
“The way he looked at you, Callie,” she says dreamily, and I can tell that I’m not going to like where that train of thought is heading.

“Can we please stop talking about this now?”

“If we stop talking about this, I’m dragging you to the garage to help me make centerpieces.”

Arts and crafts time sounds like paradise compared to twenty questions. I stand and brush off my pants.