All Broke Down Excerpt + Giveaway! 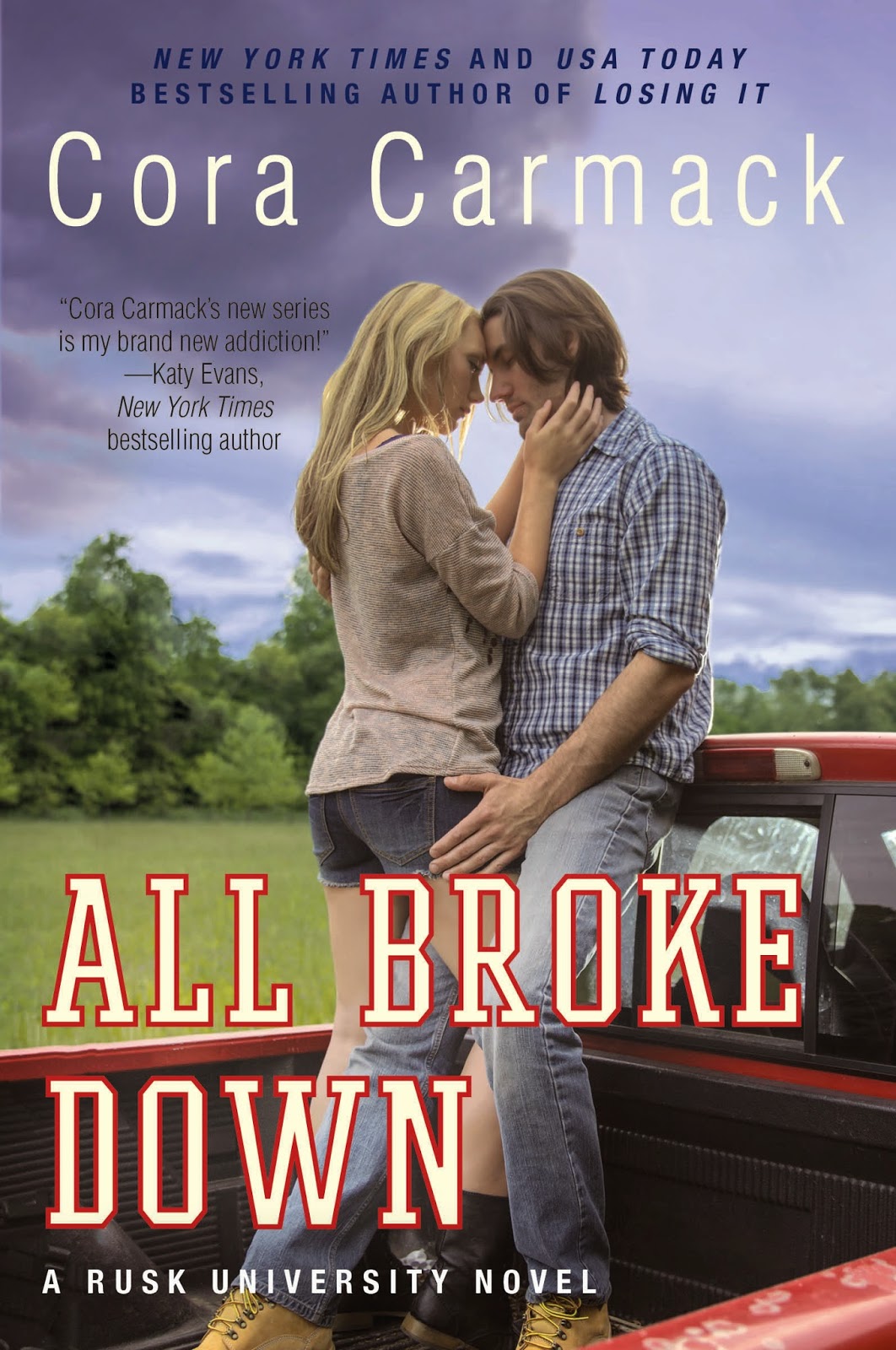 In this second book in New York Times and USA Today bestselling author Cora Carmack’s New Adult, Texas-set Rusk University series, which began with ALL BROKE DOWN, a young woman discovers that you can’t only fight for what you believe in . . . sometimes you have to fight for what you love

Dylan fights for lost causes. Probably because she used to be one.

Environmental issues, civil rights, corrupt corporations, and politicians—you name it, she’s probably been involved in a protest. When her latest cause lands her in jail overnight, she meets Silas Moore. He’s in for a different kind of fighting. And though he’s arrogant and infuriating, she can’t help being fascinated with him. Yet another lost cause.

Football and trouble are the only things that have ever come naturally to Silas. And it’s trouble that lands him in a cell next to do-gooder Dylan. He’s met girls like her before—fixers, he calls them, desperate to heal the damage and make him into their ideal boyfriend. But he doesn’t think he’s broken, and he definitely doesn’t need a girlfriend trying to change him. Until, that is, his anger issues and rash decisions threaten the only thing he really cares about, his spot on the Rusk University football team. Dylan might just be the perfect girl to help.

Because Silas Moore needs some fixing after all.

I think I get it then. That decision I saw in her eyes back in the kitchen. That’s what this, what I’m about for her, too. I’m just another part of whatever rebellion she started earlier today. About doing what she wants, not what’s expected of her.

“We’re not talking about me, though,” she says. “So you went to meet your friend, and then what happened?”

She keeps her eyes down as she picks up the gauze and begins winding it snugly around the knuckles of one hand, and then the other.

“He said the wrong thing.”

“Dylan.” Now it’s her that’s pushing too hard. I didn’t want to talk about things with my friends, and I won’t talk about them with her, either, no matter how gorgeous she is.

“I’ll guess. You were mad about what he did, and he wasn’t sorry.”

“This isn’t middle school, Pickle. He didn’t hurt my feelings. He said some shit he had no business saying, and it pissed me off. The end.”

“But you don’t think some of that anger stems from what you feel is a betrayal of your friendship?”
She finishes taping down the last of the gauze, but doesn’t let go of my hand.

“I think you’re analyzing me again. Making things more complicated than they are.”

“And I think you’re just a guy who doesn’t like to admit he has feelings.” She drags out the word, teasing me with some goofy smile on her face. I turn my hand over so I can clutch her wrist. I curlmy other bandaged hand around her waist and pull her closer.

“I feel plenty of things.”

The teasing stops. She swallows.

“I wasn’t talking about that kind of feeling.”

With her standing and me sitting, I’m eye level with her chest. I see the sharp rise and fall as she sucks in a breath. I want her in my lap again, straddling me this time.

“Doesn’t mean we can’t talk about that kind of feeling. Or experiment with it.”

“Is that Stella girl an ex?”

I cough, surprised. My throat twists uncomfortably, and it takes me a couple of solid breaths to get a hold on myself.

“Ah, no. Stella and I have never dated.”

“Do you ever run out of questions?”

“Not ever.” She turns playful again, and I’m done doing this the careful way. If she wants a rebellion, I’ll be the one to give it to her. I want her against me, and I’m tired of waiting.

I pull her forward, insinuating my knees between hers, and her body naturally follows, settling across my thighs. Her lips part, but she catches herself before she gasps this time. I keep her steady with my hands at her waist and say, “I’ll make you a deal. A question for a kiss.”

Tentatively, she lays her palms against my shoulders. They rest there, her grip light and casual. She ponders my offer for a moment, and it drives me mad that she can do that while our hips are inches away from alignment.

I cut her off. “Not so fast, Dylan Brenner. I’ve already answered one question. We’ve got to settle up first.”

I wrap her braid around my hand like I’ve been waiting to do all night, and I use it to pull her head back just enough that I can crush my mouth against hers.