ARC Review: Through to You 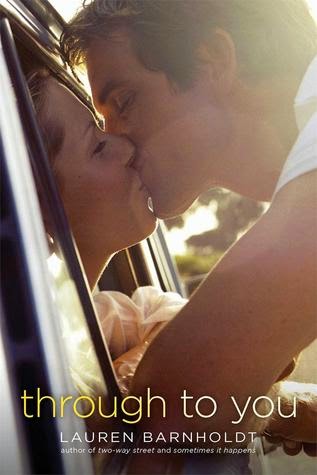 Opposites attract—and then complicate—in this romantic, relatable novel from the author of Two-Way Street and Sometimes It Happens.

It starts with a scribbled note in class: I like your sparkle. Harper had casually threaded a piece of blue and silver tinsel through her ponytail in honor of school spirit day. And that carefree, corny gesture is what grabs Penn Mattingly’s eye. Penn—resident heartbreaker of the senior class. Reliably unreliable. Trouble with a capital “T.” And okay, smolderingly sexy.

Harper’s surprised by Penn’s attention—and so is Penn. The last thing he needs is a girlfriend. Or even a friend-with-benefits. The note is not supposed to lead to anything.

Oh, but it does. They hang out. They have fun. They talk. They make out. And after a while, it seems like they just click. But Penn and Harper have very different ideas about what relationships look like, in no small part because of their very different family backgrounds. Of course they could talk about these differences—if Penn knew how to talk about feelings.

Harper and Penn understand their attraction is illogical, yet something keeps pulling them together. It’s like a crazy roller coaster—exhilarating, terrifying, and amazing all at once. And neither knows how to stop the ride…

When I first read the synopsis of Through to You, my attention was immediately captured. I wanted to read it despite the not-so-high rating on Goodreads. When I read the book though, I was quite disappointed.

Harper is the good girl type, while Penn, who is the resident heartbreaker, is the total opposite. It all started out with Penn complimenting Harper's tinsel. And when the two ditched school together, they surprised each other and themselves, which started their attraction towards each other.

Through to You started as a very interesting and promising read, but I soon became annoyed at the way the characters acted and how the story became over-dramatic. Penn's problem had a lot of hype surrounding it, yet when it came to the time that it was revealed, I was disappointed to find that it was just that. The way Penn acted, it might have been a huge mystery, but it really wasn't.

I enjoyed it a bit, because I was able to finish reading it after all. I would not go as far to that it was a waste of my time or anything remotely close to that, but it could have been so much better because I really saw potential at the start of the book. This book was not for me, but I hope others would be able to enjoy it more than I did.