Review: The Beginning of Never 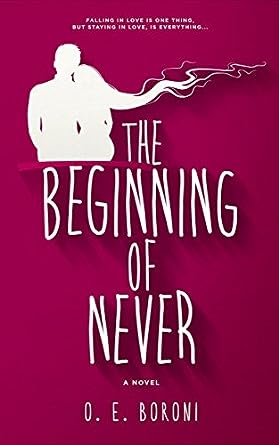 When Lenora Baker and Nathan Roqué run into each other in their boarding school courtyard, they have no idea that they are about to begin a journey that will take them the rest of their lives to recover from. Both scarred from parents who were once in love but ended up destroying each other, they are sworn off the possibility that there can truly exist a love that will never end. But when with each other they find a passion so strong that it heals as powerfully as it burns, a love that will run out is no longer an option for them. Together, they discover just how far they are willing to go to preserve what they know they will only find once in their lifetime. This is the start of their journey, and here you will come to realize, that falling in love is only the first part of the story...

I remember requesting this book in return for an honest review. But I don't remember why I requested it since, going into this book, I knew absolutely nothing about it. I guess that that was a good thing since I had no expectations either.

When I started reading this book, I liked it. Then, we hit a rough patch and I was doubtful. By the end, I liked it again. The story was good. It didn't drag as books often tend to (especially in the romance genre). I liked the main character Lenora. She was a very believable character and I enjoyed her perspective. The only time I ever got annoyed was when she kept saying that she could take care of herself when, she
couldn't.

Nathan, on the other hand, is complicated. He made me angry at times but I could never bring myself to even dislike him, much less hate him. I just really wanted to know what went through his head. Hoping to find that out in the sequel. The supporting/minor characters were all good and their presence was just right. They never felt overly involved or prop-like.

There were a few things I didn't like, though. For one, there were parts of it, in the beginning, that were a bit too clicheand it felt like the book wasn't taking itself seriously. Also, at times, the book felt so much more than two people falling in love. It was about doing something for yourself and not being dependent on anyone for your happiness. But that issue didn't shine through. I would've have like a bit more emphasis on it.

My main problem was the writing. There were times when it was quite bad. When it came to descriptions and, sometimes, entire scenes, it would suddenly take a dive from okay to really bad. I also think that the use first person was too much in descriptions. For example, instead of 'There was a long corridor and the walls were lined with paintings', it was 'I saw a long corridor and I could see paintings lining the walls'. It didn't work that well.

There were also a lot of errors in grammar and typos that lessened the enjoyment for me. By I can see some people liking this book a lot more that I did.


So, overall, this was a good book and I recommend picking it up. Everyone will have different opinions.