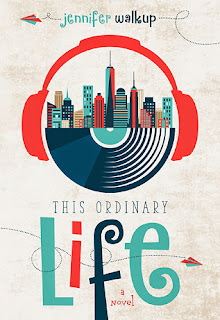 Sometimes Hope is the Most Extraordinary Gift of All.

High-school radio host Jasmine Torres's life is full of family dysfunction, but if she can score the internship of her dreams with a New York City radio station, she knows she can turn things around.

That is, until her brother Danny’s latest seizure forces her to miss the interview, and she’s back to the endless loop of missing school for his doctor appointments, picking up the pieces of her mother’s booze-soaked life, and stressing about Danny’s future.

Then she meets Wes. He’s the perfect combination of smart, cute, and funny. He also happens to have epilepsy like her brother. Wes is living a normal life despite his medical issues, which gives Jasmine hope for Danny. But memories of her cheating ex-boyfriend keep her from going on a real date with Wes, no matter how many times he asks her.

Jasmine can’t control everything. Not who wins the internship, not her mother’s addiction, not her brother’s health--not even where her heart will lead her. She wishes she could just have an ordinary life, but maybe what she already has is pretty extraordinary after all.

1. What made you want to become an author?
I’m not sure how it started, but I’ve been writing stories as long as I can remember. I still have the first book I wrote in fourth grade, about a mouse who runs away and gets stranded on a desert island. The book is bound with duct tape and illustrated by yours truly. Hopefully my stories have gotten at least a little better since then. :)

2. What is/are your favorite book/s that belong to the YA contemporary genre?
This is so hard to answer, it probably changes on a weekly/daily basis, but one that stands out over the last few years would definitely be THE BOOK THIEF. Such a gorgeous, special, book.

3. How did the idea of this novel come to you?
Like most of my stories, I started with just a kernel of an idea about my main character. Jasmine came to me first – a strong main character who loves working at her school radio station and works hard for her ultimate dream - to be a real radio DJ someday. But I knew she’d have struggles – a cheating ex boyfriend, an alcoholic mother, an absent father. Her brother’s epilepsy was also central to her character. I wanted at least one character who was struggling with epilepsy. And then Wes, with similar struggles, naturally entered the story. He was a fun character and took the story in directions I hadn’t originally planned.

4. Why did you choose to write about epilepsy?
Epilepsy is a topic that is near and dear to my heart and my family, as a few members of my family suffer from the disorder. I wanted to write a book that shows a little bit more about epilepsy, but even more importantly, a book that shows that these characters having epilepsy is secondary to them just being regular teens who like to do teen stuff. Epilepsy is a part of their life, but certainly not what defines them.

6. How long did it take you to write this book from scratch to finish?
It was spread over the course of probably 18 months, possibly closer to two years. It was forming in my mind for quite a while before I actually started writing, though.

7. What do you do in case of a writer's block?
When I’m drafting I usually don’t struggle with writer’s block, but sometimes in revisions I get stuck! I usually talk to one of my beta readers about various issues I’m working through in the book. Sometimes all it takes is a conversation about my characters with someone who knows the book to spark my creativity.

8. Ebook, paperback or hardback? Why?
I prefer paper. Either hardcover or paperback, either is fine!

9. When writing novels: Pen and paper or laptop? Why?
Mostly laptop, but I do lots of brainstorming and note taking with pen and paper, especially in the early stages of a project.

Thank you so much for patiently answering all my questions, Jennifer! <3