Audiobook Review: The Ring and the Crown 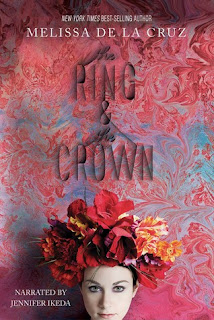 Princess Marie-Victoria, heir to the Lily Throne, and Aelwyn Myrddn, bastard daughter of the Mage of England, grew up together. But who will rule, and who will serve?

Quiet and gentle, Marie has never lived up to the ambitions of her mother, Queen Eleanor the Second, Supreme Ruler of the Franco-British Empire. With the help of her Head Merlin, Emrys, Eleanor has maintained her stranglehold on the world's only source of magic. She rules the most powerful empire the world has ever seen.

But even with the aid of Emrys' magic, Eleanor's extended lifespan is nearing its end. The princess must marry and produce an heir or the Empire will be vulnerable to its greatest enemy, Prussia. The two kingdoms must unite to end the war, and the only solution is a match between Marie and Prince Leopold VII, heir to the Prussian throne. But Marie has always loved Gill, her childhood friend and soldier of the Queen's Guard.

Together, Marie and Aelwyn, a powerful magician in her own right, come up with a plan. Aelwyn will take on Marie's face, allowing the princess to escape with Gill and live the quiet life she's always wanted. And Aelwyn will get what she's always dreamed of--the chance to rule. But the court intrigue and hunger for power in Lenoran England run deeper than anyone could imagine. In the end, there is only rule that matters in Eleanor's court: trust no one.

You know you really like a book when not one thing goes the way you want it to, and yet, someway, somehow, you still acknowledge how beautiful the book is and still be happy that you read it anyway.

The Ring and the Crown is an amazing book filled with intrigue, drama, politics and of course, romance. It is a captivating book that pulled me into a world of the court and ball dances, and it was a world that was easy to fall in love with.


"A false victory is a hollow one.”


The Ring and the Crown is told from multiple perspectives - Marie-Victoria, princess of England and France; Isabelle, supposedly the wife of Leopold, prince of Prussia; Aelwyn, daughter of the empire's mage, best friend of the princess; Ronan, an American girl seeking a husband because they are broke. I expected to be confused by this, but surprisingly, the continuum of the story was not disturbed, and the story flowed smoothly.

Of all the little stories in this book, my favorite is probably Ronan's. From the start of the book, I already felt really connected to her. I mean, I was able to connect with all the characters in this book, but I felt the most connected to Ronan. There's just something about her that pulled me in, and I was really rooting for her and Prince Wolf.

"One did not wonder why the sun shone in the sky, one just accepted it as a fact of life."


I read this book in Audio book format, and I must tell you, Jennifer Ikeda is truly a talented narrator. I think I would have liked this book less had it not been for her voice. She had the ability to add more intrigue and more wonder to the already intriguing and wonderful book.

The reason why I couldn't give this book a full 5 stars is because towards the last 7 (I think) chapters of this book, I felt like things were rushed. One bad thing after another happened in just a matter of a few chapters, and they were all congested together. Certain things were also revealed in those last 7 chapters, and putting those revelations near the congested chapters just really put me off.

There were a lot of things that didn't happen the way I wanted it to. In fact, I was really just frustrated in the end. But despite that, as I said before, it's not a reason for me to deduct a star or even half from my rating. I acknowledge how beautifully written this book is, and I understand that it was a good close to the story.

I really love this book and I cannot wait for the next one! Actually, it was only after finishing this book that I learned of the second book. I think that this book is amazing already even as a standalone, but of course now that I know about it, the need to read it as soon as possible is there.

I recommend this book to those interested in a combination of historical fiction, romance and fantasy.