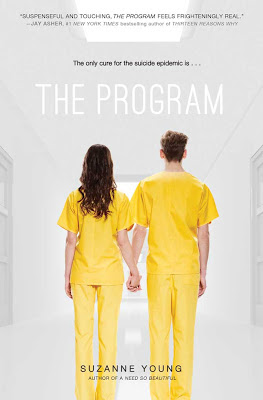 Sloane knows better than to cry in front of anyone. With suicide now an international epidemic, one outburst could land her in The Program, the only proven course of treatment. Sloane’s parents have already lost one child; Sloane knows they’ll do anything to keep her alive. She also knows that everyone who’s been through The Program returns as a blank slate. Because their depression is gone—but so are their memories.
Under constant surveillance at home and at school, Sloane puts on a brave face and keeps her feelings buried as deep as she can. The only person Sloane can be herself with is James. He’s promised to keep them both safe and out of treatment, and Sloane knows their love is strong enough to withstand anything. But despite the promises they made to each other, it’s getting harder to hide the truth. They are both growing weaker. Depression is setting in. And The Program is coming for them.

The Program is a book which, in my opinion, has quite an interesing description. But it has a description which, combined with the cover and the name of the book, gives a lot away. There are many things that you know are going to happen. That could make the book predictable and uneventful.

Thankfully, the author was very much aware of that little could-be problem and wrote the book accordingly so that it remained interesting.

This is a well written and well planned book with very likable characters and - most of the time - a good pace. I was a bit surprised that it wasn't more popular since it has all the YA aspects that are present in popular books and then some.

Now, saying it has all the YA factors may be seen as a good thing or a bad thing. In this case, it's a good thing, mostly.

I really don't wanna say much about this book because I feel like all the things that happen need to be experienced without knowing much, exactly the way I experienced it. I liked deciding for myself whether The Program was right for teenagers or not, whether what the parents did was justified or not. So when going into this book, you should keep an open mind about everything.

This book is divided into three parts. The first part was very good. It was very emotional, heavy and, at times, depressing but that was necessary and good. The second part was revelatory and very interesting. It answered many questioned which I has while read part 1. In fact, I was very impressed with the book at that point.

It was the third part that worked against it. It wasn't bad, per say but it wasn't good enough. It was too clean cut. There were some things that happened too quick and some that were too convenient. There were also some events that happened without much build-up. They just popped up out of the blue.

The third part started okay but it slowly lost the realistic factor. That's my major complaint about the book. It lacks the gritty-ness of life. It made life seem like slice of cheese, all solid and neat, being eaten with a spoon. Life is more like pouring soup in a retainer and trying to eat it with a fork. Basically, it's a mess. That didn't show in the book.

Also, there were one or two scenes when Sloane was telling a story but it seems more like someone reading from a published novel and less like a teenager talking. Meaning it was too detailed, descriptive and used words people don't normally use in casual conversation.

But other that these two things, the book was very good,I enjoyed it and I do recommend it. I can't guarantee that everyone will like it but it had many good qualities so I doubt you'll hate it.