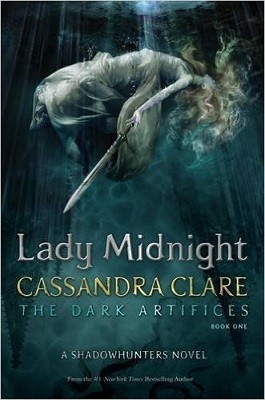 It’s been five years since the events of City of Heavenly Fire that brought the Shadowhunters to the brink of oblivion. Emma Carstairs is no longer a child in mourning, but a young woman bent on discovering what killed her parents and avenging her losses.

Together with her parabatai Julian Blackthorn, Emma must learn to trust her head and her heart as she investigates a demonic plot that stretches across Los Angeles, from the Sunset Strip to the enchanted sea that pounds the beaches of Santa Monica. If only her heart didn’t lead her in treacherous directions…

Making things even more complicated, Julian’s brother Mark—who was captured by the faeries five years ago—has been returned as a bargaining chip. The faeries are desperate to find out who is murdering their kind—and they need the Shadowhunters’ help to do it. But time works differently in faerie, so Mark has barely aged and doesn’t recognize his family. Can he ever truly return to them? Will the faeries really allow it?

This was book my most anticipated book of the year. And while I enjoyed it, I was still a little disappointed.
I was super nervous about reading it. I wanted to like it but I wanted my review to be as fair as possible so I was also at the risk of over-analizing. It took me some time to get my thoughts in order.
First of all, I'm still a bit angry about the last page, before the epilogue. When I read it, I wanted to hammer someone's head in. With a hammer. And it wasn't so much the characters that I'm angry at, it's that the author decided to take that direction. That she added this, another complicated, another lie.
With many other authors, I could have just rolled my eyes and said it was stupid. But with Cassie, who is one of my favorites, I expected more.
And it's not that I don't understand the reason. I really,really do. I thought a lot about it and I get why that decision was made. It wasn't right but people make mistakes. That's why I'm not as angry at the characters. I just loathed it.
Moving on from that.
This is a slow burning book, especially for those who have already read other series' by Cassie because there a lot of introducing-the-world in it for those who are starting with this series. It is, after all, also a standalone. But that doesn't mean it was boring. It was a very interesting book and I flew though it (in two and a half days).
Also, there's her writing style. I remember when I used to absolutely love it. I still like it, but not as much. Cassie has a noticeably different style. She has this thing with hair and eyes and body postures and facial expressions. And the way the colors change due to the different amounts and types of lights. So there are a lot of descriptions of them. And similies! Lots of 'em!
But they mostly work. She hasn't gone into the Shatter Mecategory of writing yet, thankfully.
Now, I'm done being horrible about a book I waited two years for. Let's get to the things I liked:
1. The Characters: Characters, I feel, are a specialty of Cassie's. She writes such distinct characters and gives them beautiful stories to flesh them out that you can't help but feel connected to them.
Emma and her sass was great (even if she got annoying sometimes and did stupid things). I adored the twins' relationship with each other. Livvy is so great with everyone and Ty is just... inetersting. I can't wait to get to know him more. Dru is so cute and fun and Tavvy, the baby... All I can say is, "Cassie, please don't hurt him." Mark, for me, is still walking the thin like between love and I-will-kill-him-slowly-and-painfully.
And Jules... Oh Jules, Jules, Jules. He is so... amazing. I won't say perfect, because he isn't. No well developed character can be. But that's what makes them precious. And he is very precious. I especially loved him during his last conversation in the book. And I loved him throughout the book with his siblings.
2. The two major plot twists/revelations: I can't really say anything about that here except that I didn't, at all, see either of them coming. I could say 'Oh my God!' a thousand times and it wouldn't be enough.

The Mystery, which I'm adding this this point, was also done very well. I did not guess the person responsible and all the hints that were there were expertly hidden.
3. The family aspect: Family plays a very important role in the book and it was handled beautifully. Each individual relationship was given time and importance and I loved that. I love how much they care.
4. The ending: This is the epilogue ending and not the infuriating one. I kinda expected what happened to happen but I don't know how that's going to play out in the next book. I'm very excited to find out though.
Overall, this was a great book. There were parts I didn't like, parts I liked and parts I'm still buzzed about. It's not a mind-blowing book, for me at least, but I have a feeling the series will get better with every book.