ARC Review: Even If the Sky Falls by Mia Garcia 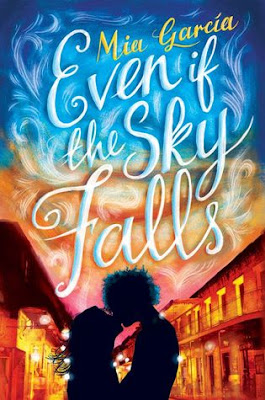 All she needs is one night to be anyone she wants.

Julie is desperate for a change. So she heads to New Orleans with her youth group to rebuild houses and pretend her life isn’t a total mess. But between her super-clingy team leader and her way-too-chipper companions, Julie feels more trapped than ever.

In a moment of daring, she ditches her work clothes for DIY fairy wings and heads straight into the heart of Mid-Summer Mardi Gras, where she locks eyes with Miles, an utterly irresistible guy with a complicated story of his own. And for once, Julie isn’t looking back. She jumps at the chance to see the real New Orleans, and in one surreal night, they dance under the stars, share their most shameful secrets, and fall in love.

But their adventure takes an unexpected turn when an oncoming hurricane changes course. As the storm gains power and Julie is pulled back into chaos she finds pretending everything is fine is no longer an option.

When I first read about Even If the Sky Falls, I wanted to read it immediately. It also helps that the cover looks amazing, so of course I really wanted to read it. However, I must say that I am disappointed by the book. The first few pages were very promising, but as I read on, I hated it more and more.

At almost 10% of the book, I felt like there was something about the way it was written that didn’t fly well with me. Although it was very interesting, I just didn’t feel connected to the story nor the main character. I didn't feel any feels from the romance, and the way it went just felt weird and unnatural to me. I thought that there was no chemistry at all between the two characters.

I also hated the fact that there were quite a lot of things written in Spanish, when I don’t know a single word of Spanish. I always hate that because how the heck would I understand it? Another thing that I hated is the fact that it seemed to jump between past and present per chapter without any warning, so you’d read the first sentence in a chapter and think it’s a continuation, only to learn later on that the chapter is actually about something from the past. It was very confusing, and I just got annoyed when I learned about it.

I actually had luck in the past with books that happen in a span of 24 hours like Where She Went and The Statistical Probability of Love at First Sight, but this one just didn’t go well for me. For contemporary novels, especially those that happen in just a day, I usually fly through them quickly. However, I read this one in a number of days. I just wasn’t grasped by the story, and I just really didn’t like it.

I also hated how the ending felt lacking somehow. I felt like it just ended abruptly, and there were still so many questions left unanswered. I mean, they didn't even talk, they just kissed and it ended right there! I feel cheated somehow.

I tried so badly to like this because the premise is very interesting and it seemed like my type of read, but I just really didn't enjoy this one. I also think that it put me in a mini reading slump, which just sucks for me. However, I also think that Mia Garcia is a promising author, but just not with this particular novel. After all, the story in itself is well written for the most part.