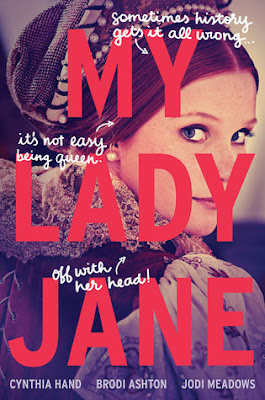 The comical, fantastical, romantical, (not) entirely true story of Lady Jane Grey. In My Lady Jane, coauthors Cynthia Hand, Brodi Ashton, and Jodi Meadows have created a one-of-a-kind fantasy in the tradition of The Princess Bride, featuring a reluctant king, an even more reluctant queen, a noble steed, and only a passing resemblance to actual history—because sometimes history needs a little help.

At sixteen, Lady Jane Grey is about to be married off to a stranger and caught up in a conspiracy to rob her cousin, King Edward, of his throne. But those trifling problems aren’t for Jane to worry about. Jane gets to be Queen of England.

My Lady Jane is so different from what I imagined it would be. Truthfully, I didn't think that I would like this book when I read the first few chapters. The narrators didn't merely narrate the story in this book; they actually talk to the readers. For those of you who watch the TV series Jane the Virgin, you know that there's a narrator that talks to the watchers, and it's the same case in this book. I found it weird at first, how these narrators would just pop out out of nowhere and talk to me, the reader. However, as I read on, I became used to it, and at some point I actually found it quite amusing and entertaining.

I was also wary at first how three writers would be able to write together coherently, but it turns out that I was worried for nothing. The story flowed seamlessly, the plot is cohesive, and the pacing is good. I haven't read a book written by any one of these authors yet, but I think after this I should. I also think that these three should work together to write another book because they're just so good at it! I know that this book ended nicely, but I kind of wish that it's part of a series, just to read another book written by these three again.

My Lady Jane went beyond my expectations! I thought it would just be an imaginative historical retelling which weaves magic into the history of England, but it's so much more than that. It's also about family, betrayal, allies, strategy, companionship, self-discovery and love. I think the most unexpected thing of all from this is the feels, because I usually don't expect feels from historical retellings. And oh my gosh, the feels just made me feel so giddy!

My Lady Jane is somewhat of a serious book because of the main story arc. However, the authors were able to manage to make this one light as well because of how some of the characters interacted with each other. Jane and Gifford often argued with each other, while Edward and Gracie often teased each other. I really liked how this book is not all serious, how the authors managed to put some fun into it too. Actually, there were a few times when I laughed out loud, which is something only a few books can accomplish.

I have so much love for the main characters in this book! They're all either kind, or clever, or badass, or all three. I was fascinated by historical fictions back when I was younger, but I thought that I had outgrown them because the last few historical fictions books I read were not-so-good ones. My Lady Jane has restored my faith in historical fiction books! I just didn't expect to love this one so much!

Overall, I just really enjoyed this book in a way that I never thought I would. I love the story, the magic and the characters, and any day these three authors decide to write another book together, I would buy it without reading the synopsis!