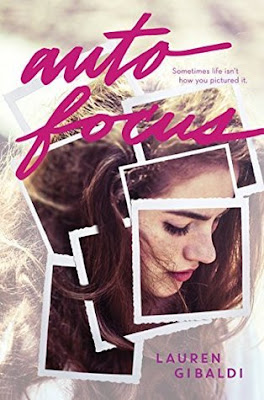 From the author of The Night We Said Yes comes a fun and heartfelt YA contemporary tale. When Maude decides to search for information about her birth mother, she finds out more than she expected. Perfect for fans of Stephanie Perkins and Susane Colasanti.

Family. It’s always been a loaded word for Maude, whose birth mother died after giving her up for adoption. With her best friend, Treena, in college in the same town where her birth mother grew up, Maude decides to visit and explore her past. But when Maude arrives, she quickly discovers that Treena doesn’t seem to have time for her—or for helping with her search. Enter Bennett, a cute guy who lives in Treena’s dorm. He understands Maude’s need to find her mother. And as Bennett helps Maude, she starts to realize that her mother’s past doesn’t have to define her own future.

"I'm a blur. I'm not clear and crisp like some people; instead I'm messy on the edges and not quite formed. I'm many pieces all put into one, and one day I'll figure them all out. But right now, I'm happy being a blur. I'm happy being every part of me, every image of me, even if they don't feel like me."


When I learned that Lauren Gibaldi was coming up with a new book, I was really excited. I read her debut novel The Night We Said Yes and I really enjoyed it, so I wanted to read whatever she came up with. I was so excited about this, in fact, that I didn't care what it was about and I just requested this one without really reading the synopsis. I had no idea that this was about adoption, but I enjoyed it all the same.

Autofocus is about a girl who went on a journey to find out more about her birth mother, who died when she gave birth to Maude. Her adoptive parents are not exactly supportive, but not exactly not supportive either, which I think was good because that makes it more realistic. So Maude goes to FSU to visit her best friend, and there she finds out more about her mom.

2. Realistic: Maude has a good relationship with her adoptive parents, but they weren't exactly happy when she wanted to go on this journey to find her biological mother. I think that's a realistic portrayal because no matter how close she is to her parents, I think most adoptive parents will have some inhibitions and worries about their kid looking for his/her biological mother. However, I'm glad that Maude didn't have any problem in general when it came to convincing her parents, which I think was also realistic, considering that her parents really do love her as well and want what's best for her. They only wanted Maude to be careful and remember that she might be disappointed.

3. Self-discovery: Maude took a journey to find her mom in order to find herself. It's actually a cliche, but I didn't really mind because I love books with self discovery. Maude realized that her biological mom doesn't actually define her, which is also another cliche, but then Maude also realized that she isn't necessarily like anyone else as well. I think that's something important for everyone to know - that we can be unique and ourselves, not defined by who others are or the circumstances around us.

4. Bennett: Bennett is such a dork and a gentleman combined into one! He had a lot of opportunities to take advantage of Maude, but he chose not to. Instead, what he did was accompany Maude through her journey, and was there for her every step of the way. He understood when Maude needed company and when Maude needed to be alone. He was also a great friend first to Maude, and that matters.

2. The ending: I feel like in terms of the romance part, the ending didn't really give it justice. I would really like to find out more of what happened in the end, or how they planned to move forward with their relationship. They still talked, but I just wanted to know, what now?

Overall, I really enjoyed reading this story. It was a quick read and it was interesting. My only main problem about it is that I couldn't fully connect to it.