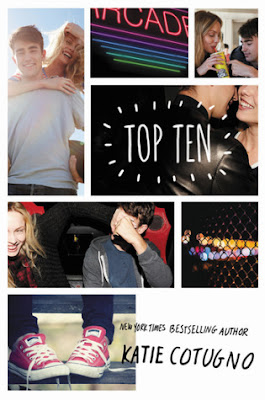 Ryan McCullough and Gabby Hart are the unlikeliest of friends. Introverted, anxious Gabby would rather do literally anything than go to a party. Ryan is a star hockey player who can get any girl he wants—and does, frequently. But against all odds, they became not only friends, but each other’s favorite person. Now, as they face high school graduation, they can’t help but take a moment to reminisce and, in their signature tradition, make a top ten list—counting down the top ten moments of their friendship:

10. Where to begin? Maybe the night we met.
9. Then there was our awkward phase.
8. When you were in love with me but never told me…
7. Those five months we stopped talking were the hardest of my life.
6. Through terrible fights…
5. And emotional makeups.
4. You were there for me when I got my heart broken.
3. …but at times, you were also the one breaking it.
2. Above all, you helped me make sense of the world.
1. Now, as we head off to college—how am I possibly going to live without you?

At the beginning of this book, I actually hated it because it sounded juvenile for people who are already going to college. In the first chapter, the conversation did not go smoothly and there were so many breaks for every speech that my head was already swimming by the time the chapter concluded. However, and thank goodness for this, it slowly warmed up to me - the speech improved and they sounded less juvenile towards the middle of the book.

Additionally, I also really didn't like how the story was formatted, wherein it's not in chronological time order. The story lists down the top 10 moments of the two main characters' friendship, and although the idea of the top 10 is what drew me to the book in the first place, I didn't like that it was not in chronological order. It made it confusing for me to piece together the story during the first few chapters.

On another note, what I really liked about this book is how their friendship developed. The friendship of the two main characters is not a typical one - Ryan is a jock, while Gabby is a shy person with anxiety. I like how they constantly reassured each other about each other, and that they always had each other's backs even though there were things they didn't agree on. I also like that (view spoiler)

I also really loved the family dynamics of the Harts. They're not a perfect family and there are many misunderstandings, but I'm glad that they always have each other's backs no matter what, even though how they show it may not always be ideal and may be misinterpreted.

Overall, I didn't really like this book as much as I thought I would have, but then there were certain aspects that really stood out despite the bad beginning.