ARC Review: The Heartbeats of Wing Jones by Katherine Webber {4.0} 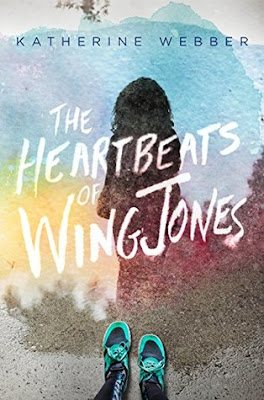 Wing Jones, like everyone else in her town, has worshipped her older brother, Marcus, for as long as she can remember. Good-looking, popular, and the star of the football team, Marcus is everything his sister is not.

Until the night everything changes when Marcus, drunk at the wheel after a party, kills two people and barely survives himself. With Marcus now in a coma, Wing is crushed, confused, and angry. She is tormented at school for Marcus’s mistake, haunted at home by her mother and grandmothers’ grief. In addition to all this, Wing is scared that the bank is going to repossess her home because her family can’t afford Marcus’s mounting medical bills.

Every night, unable to sleep, Wing finds herself sneaking out to go to the school’s empty track. When Aaron, Marcus’s best friend, sees her running one night, he recognizes that her speed, skill, and agility could get her spot on the track team. And better still, an opportunity at a coveted sponsorship from a major athletic gear company. Wing can’t pass up the opportunity to train with her longtime crush and to help her struggling family, but can she handle being thrust out of Marcus’s shadow and into the spotlight?

While I was reading the first few chapters of The Heartbeats of Wing Jones, I thought I would not like the story. I thought it was weird because I am sure that this is supposed to be a contemporary novel, so I didn’t get what was up with the dragon and the lioness. To be honest, I still don’t get it after I closed the book, but I must tell you that I thoroughly enjoyed reading this book. This is the first book I’ve read in a sitting for a long, long time, and that says a lot about how much I enjoyed this book.

The Heartbeats of Wing Jones is unlike any story I’ve ever read. It combines family, love, racism, sports, and self-discovery into a books that’s only a few hundred pages. It centers on Wing Jones, who has always lived in the shadows of her older brother Marcus, a football star. But everything changes when Marcus gets into a drunk driving accident that kills two people. Marcus himself is in the hospital, barely surviving. Then Wing discovers that she can run, and run she does. She joins the track team and proves to everyone that she can shine as well as her brother.

I don’t usually like books that center on sports because I tend to be clueless about them, but this one caught me by surprise. I really liked how sports played a huge role in the story, and how the main character grew by joining a sports team. I loved the journey Wing took in order to make everyone accept her, and to finally accept herself for who she is - quirks and all. The self-discovery and self-acceptance the main character went through was phenomenal, and it was definitely what made me love this book so much.

The family dynamics is unique. When Marcus got into the accident that landed him in the hospital, Wing’s family became consisted of only women. Two grandmothers, her mother, and Wing. Although there was not a “man of the house,” all four women worked hard in their own ways to help the family in the time of grief and financial instability. Although they may be stubborn, they do care very much for each other. The family also consisted of a number of races. Wing is a mix of being American, Asian and Black, and it really sends across a message of breaking racial barriers.

Overall, this book is surprisingly amazing and deeply enjoyable. I do recommend it to anyone who is interested. I swear, this book will not be like any other book that you have read.