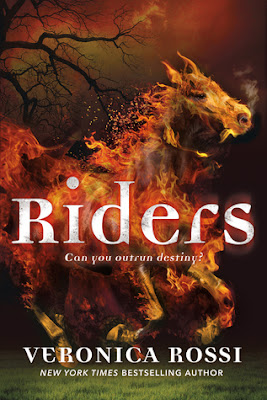 Nothing but death can keep eighteen-year-old Gideon Blake from achieving his goal of becoming a U.S. Army Ranger. As it turns out, it does.

While recovering from the accident that most definitely killed him, Gideon finds himself with strange new powers and a bizarre cuff he can’t remove. His death has brought to life his real destiny. He has become War, one of the legendary four horsemen of the apocalypse.

Over the coming weeks, he and the other horsemen—Conquest, Famine, and Death—are brought together by a beautiful but frustratingly secretive girl to help save humanity from an ancient evil on the emergence.

Now—bound, bloodied, and drugged—Gideon is interrogated by the authorities about his role in a battle that has become an international incident. If he stands any chance of saving his friends and the girl he’s fallen for—not to mention all of humankind—he needs to convince the skeptical government officials the world is in imminent danger.

But will anyone believe him?

I read Veronica Rossi's first series based on impulse. The author was coming to the Philippines, so I bought the first book to be signed. Little did I expect that I would be completely sucked in by the story. So when I learned that she was coming up with a new series, I was really, really excited! It didn't matter what the story was about, it didn't matter that there was no synopsis yet; I just wanted to get my hands on it immediately.

All those said, I felt like Riders was a disappointment. Maybe it's because of my expectations, or maybe I just really didn't like the writing style in this one. Riders is told by a character being interrogated in the present, so he has to narrate the whole story to the inquisitor. That said, this book is full of narratives and a lot of unnecessary thoughts from the main character. Because of that, this felt like a short story dragged to have 300+ pages.

Writing style aside, I think that the story is pretty amazing. It's actually very interesting, and it definitely takes on a unique spin to the story. I believe that each of the characters were really able to embody the characteristics of the aspect they were representing. If only this didn't feel draggy, I'm pretty sure that I would have loved this book.

Overall, I was just disappointed because I felt like it dragged on and on with lots of excessive narrative. It didn't have the same effect on me as Under the Never Sky had, and I don't think I will be continuing with this series.