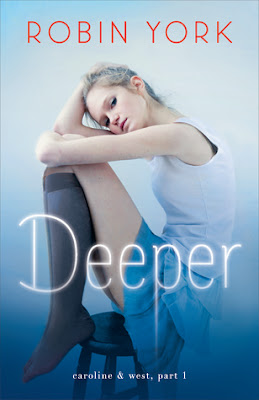 In Robin York’s sizzling debut, a college student is attacked online and must restore her name—and stay clear of a guy who’s wrong for her, but feels so right.

When Caroline Piasecki’s ex-boyfriend posts their sex pictures on the Internet, it destroys her reputation as a nice college girl. Suddenly her once-promising future doesn’t look so bright. Caroline tries to make the pictures disappear, hoping time will bury her shame. Then a guy she barely knows rises to her defense and punches her ex to the ground.

West Leavitt is the last person Caroline needs in her life. Everyone knows he’s shady. Still, Caroline is drawn to his confidence and swagger—even after promising her dad she’ll keep her distance. On late, sleepless nights, Caroline starts wandering into the bakery where West works.

They hang out, they talk, they listen. Though Caroline and West tell each other they’re “just friends,” their feelings intensify until it becomes impossible to pretend. The more complicated her relationship with West gets, the harder Caroline has to struggle to discover what she wants for herself—and the easier it becomes to find the courage she needs to fight back against the people who would judge her.

When all seems lost, sometimes the only place to go is deeper.

After Caroline Piasecki's ex-boyfriend Nate posted pictures of her naked online, the whole school began discriminating her and calling her names and her reputation is ruined. When West Leavitt punches Nate, Caroline warned him not to get involved with her life. But Caroline is drawn to him, as he is to her. They start spending time together, and the attraction becomes undeniable.

I didn't know what to expect when I read this book, which is just as well because I know that I would be disappointed had I had any expectations. I'm still debating between 3.5 and 4.0 stars for this one.

What I liked:
I liked how this book explored an issue that people tend to stay away from, but needs to be discussed. What started out being just a little prank had a great effect on Caroline, and I loved how the effects were explored. I liked how a story was already established before all the sex began, unlike many of the New Adult books out there nowadays. I liked how Caroline became stronger and stronger and was able to stand up for herself to everyone in the end. I also loved how she was flying solo at the start to how she found her niche in her group of friends.


What I didn't like:
I wasn't really able to connect with the story or the characters of the book. There were times that the story felt dragging, and I was always consciously aware of how many the pages were left. I think the characters were not explored well - their backgrounds were clearly mentioned, but not explored, leaving me to question things about the main characters. I also didn't like how it ended because I didn't know what happened to the families. It's like it had a proper ending closure-wise, but story-wise, not really.

Overall, I was able to enjoy this book because I liked bits and pieces here and there, but I think that it could have been better.