Review: This is My Brain on Boys by Sarah Strohmeyer {2.0} 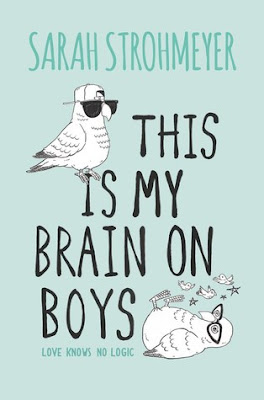 Addie Emerson doesn’t believe in love. Not for herself, anyway. With one year left of high school, she’s more interested in snagging a full scholarship to Harvard than a full-time boyfriend.

That doesn’t mean she’s oblivious to the ways of the heart. Or, rather, the head. Because after months of research, Addie has discovered how to make anyone fall in love. All you need is the secret formula.

But will her discovery be enough to win the coveted Athenian Award and all its perks? (See above, full scholarship to Harvard.) Or will she be undone by Dexter, her backstabbing lab partner, who is determined to deep-six her experiments at their exclusive private school?

Those are the least of her problems now that she’s survived a death-defying flight with a mysterious, dark-haired boy, who has delicious chocolate-brown eyes and a few secrets of his own.

With an experiment to mastermind, an infatuated exchange student on her hands, and at least one great white shark (more on that later), can Addie’s prefrontal cortex outwit her heart? Or will she have to give in to her amygdala and find out, once and for all, if this thing called love is more than just her brain on drugs?

This Is My Brain on Boys is an unusual book in that the manner in which the main character speaks reminds me of Sheldon Cooper from The Big Bang Theory, and I'm not sure if that works for written novels.

What I didn't like:
1. The three robots: There are 3 people in this book who speak like Sheldon - Addie, Dex and Mrs. Brooks. I mean, I think it would have been understandable if Addie was the only one who was like that, but no, there are three of them. That made it unrealistic.

2. Tess and Addie's friendship is pretty weird: I think I would have liked it if there was an explanation as to how these two became friends because I don't think it's realistic. Addie is Addie, while Tess is more of the popular girl kind - wears makeup, worries about her boyfriend, etc.

3. Kara and Kris' relationship: Kris is a jerk because he went on kissing another girl while he is still in a relationship with Kara. Granted, Kara is a bitch and threatened him with whatever, but he still should have broken up with her nonetheless.

4. The ending: What is up with the ending? I expected some kind of reaction with Kris, but there wasn't any explanation in the end. The ending felt like a nice close to the book, but I am not satisfied with it.

What I Liked:
1. The experiment: The experiment is very interesting for me, and I liked it because we discussed a similar concept in my Social Psychology class last term. I like the fact that the author didn't just invent something up, but chose something that actually has basis. Being subject to scary situation indeed increases our heart beat and we tend to associated this to attraction.

2. It's an entertaining novel: Despite the fact that I didn't like many aspects from this novel, I have this strange fascination with it. I didn't just want to leave the novel as a DNF because I felt this need to finish it.