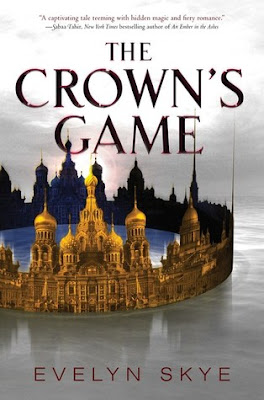 Vika Andreyeva can summon the snow and turn ash into gold. Nikolai Karimov can see through walls and conjure bridges out of thin air. They are enchanters—the only two in Russia—and with the Ottoman Empire and the Kazakhs threatening, the tsar needs a powerful enchanter by his side.

And so he initiates the Crown’s Game, an ancient duel of magical skill—the greatest test an enchanter will ever know. The victor becomes the Imperial Enchanter and the tsar’s most respected adviser. The defeated is sentenced to death.

Raised on tiny Ovchinin Island her whole life, Vika is eager for the chance to show off her talent in the grand capital of Saint Petersburg. But can she kill another enchanter—even when his magic calls to her like nothing else ever has?

For Nikolai, an orphan, the Crown’s Game is the chance of a lifetime. But his deadly opponent is a force to be reckoned with—beautiful, whip-smart, imaginative—and he can’t stop thinking about her.

And when Pasha, Nikolai’s best friend and heir to the throne, also starts to fall for the mysterious enchantress, Nikolai must defeat the girl they both love…or be killed himself.

As long-buried secrets emerge, threatening the future of the empire, it becomes dangerously clear—the Crown’s Game is not one to lose.

What I Liked:
1. The premise of this book is very interesting: Set in Russia, the two enchanters born of that time (1800’s) were to enter in the Crown’s Game to duel each other until one dies and the other becomes the Grand Enchanter of Russia. I mean, it has magic and it’s set in Russia! I really was interested in that plot, and I felt like it would be a really unique book.

2. The vivid descriptions: In the game, the enchanters were tasked to please Pasha for his birthday celebration, so the enchanters created a lot of beautiful things such as fountains, magical boxes that would create masquerade gowns, islands, etc. The author did a really great job of describing these, and I felt like I was able to see those things clearly.

3. The writing: Not that it was anything special, but I felt like the writing was good. I had no problems with the pacing and choice of words. And as mentioned above, the author is really good in descriptions without being too overbearing with words.


What I Didn’t Like:
1. Multiple POVs: I don’t usually have problems with multiple POVs, especially when the book is in the third person perspective, but I was just annoyed in the execution of it in this book. At first I thought there was already this set amount of narrators, but throughout the book, new ones just keep popping out. I would prefer it if from the start, I knew which people would get to narrate the novel, because I was just confused at times why there were new ones popping out, even neat the end of the book.

2. Love Square?: I don’t really like love triangles, but this novel has a love square! It was infuriating because I was really looking forward to the magic element of the novel, but at some point the focus became the romance. And can I just say how predictable it is that Vika and Nikolai would fall in love with each other? I think I would have preferred it if it became Vika + Pasha and Nikolai + Renata, just for the sake of being different for once.

3. Bland: I don’t know, this book just wasn’t interesting enough for me. I was really looking forward to reading this book the longest times, but it fell short of my expectations. In my opinion, it lacks the excitement that I wanted it to have, so I didn’t really mind if I was interrupted or anything.