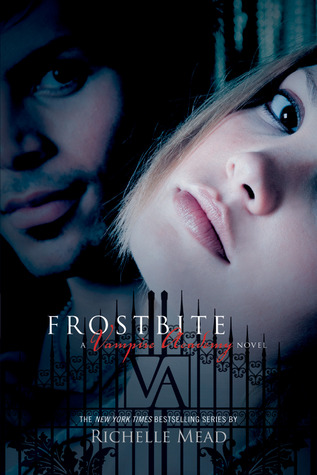 It’s winter break at St. Vladimir’s, but Rose is feeling anything but festive.
A massive Strigoi attack has put the school on high alert, and now the Academy’s crawling with Guardians—including Rose’s hard-hitting mother, Janine Hathaway. And if hand-to-hand combat with her mom wasn’t bad enough, Rose’s tutor Dimitri has his eye on someone else, her friend Mason’s got a huge crush on her, and Rose keeps getting stuck in Lissa’s head while she’s making out with her boyfriend, Christian! The Strigoi are closing in, and the Academy’s not taking any risks... This year, St. Vlad’s annual holiday ski trip is mandatory.

But the glittering winter landscape and the posh Idaho resort only create the illusion of safety. When three friends run away in an offensive move against the deadly Strigoi, Rose must join forces with Christian to rescue them. But heroism rarely comes without a price...

I dont think that this second book is as good as the first, but it's still good nonetheless, so I'm giving it four stars. Though I was more into the first book, this definitely had more action!

; I love the romance and tension between Rose and Dimitri, and how it gets me all excited and stuff whenever Dimitri does something to show he has feelings for rose as well.

I also loved the part when they got caught by the Strigoi, which made them learn a lot of stuff..

Overall, I loved many bits, and I also loved it as a whole, but then I felt like there was something missing, but only a bit.. So, my rating is

“There's nothing worse than waiting and not knowing what'll happen to you. Your own imagination can be crueler than any captor.”

“We can't stop living because other people are dead.”

The ghost of a smile flickered on his face. "Yes, she was. Is. And that's why I had to say no. I couldn't return that...couldn't give her what she wanted. Not when..." He took a few steps toward me. "Not when my heart is somewhere else.”

“What matters is that someone—that you—know me that well. When a person can see into your soul, it's hard. It forces you to be open. Vulnerable. It's much easier being with someone who's just more of a casual friend.”

“When Love And Jealousy
Collide On The Slopes,
Winter Break Turns Deadly”

“In the real world, you can make your own miracles.”