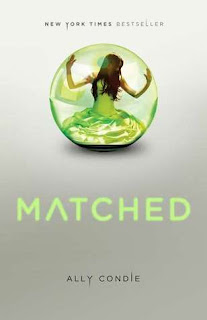 Cassia has always trusted the Society to make the right choices for her: what to read, what to watch, what to believe. So when Xander's face appears on-screen at her Matching ceremony, Cassia knows with complete certainty that he is her ideal mate... until she sees Ky Markham's face flash for an instant before the screen fades to black.

The Society tells her it's a glitch, a rare malfunction, and that she should focus on the happy life she's destined to lead with Xander. But Cassia can't stop thinking about Ky, and as they slowly fall in love, Cassia begins to doubt the Society's infallibility and is faced with an impossible choice: between Xander and Ky, between the only life she's known and a path that no one else has dared to follow.

Matched is set in a dystopian world where Society controls everything - the food they eat, the jobs they would have, their every day schedule, and even whom they love.

The story starts off with Cassia's Match Banquet. When she the face of Xander, her best friend, on the screen, she isn't surprised at all. That is, until later on when another boy's face is shown on the screen - Ky Markham.

Cassia then begins to be interested in Ky. Cassia is willing to listen, while Ky is willing to share. As the two fall in love, Cassia begins to question the Society's infallibility, and even more questions arise. Are the Matches they make relliable? And just what does the red tablet do?

Now, Cassia is faced with an impossible task. She must make a choice between Xander and Ky, between the boy that's been her best friend since childhood, or the boy she never even really notice before - a choice she never really had in the first place.


"Society matched them, but love set them free."

“I came up on the screen, too, Cassia. But he was the one you chose to see.”

“Every minute you spend with someone gives them a part of your life and takes part of theirs.”

“Now that I've found the way to fly, which direction should I go into the night?”


“Cassia.
I know which life is my real one now, no matter what happens. It’s the one with you. For some reason, knowing that even one person knows my story makes things different. Maybe it’s like the poem says. Maybe this is my way of not going gentle. I love you.”

“That’s how I know they are dreams. Because the simple and plain and everyday things are the ones that we can never have. (Cassia Reyes)”