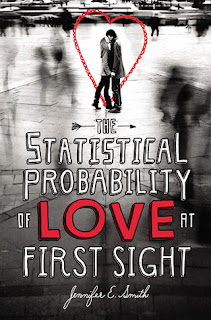 Title: The Statistical Probability of Love at First Sight

Who would have guessed that four minutes could change everything?

Today should be one of the worst days of seventeen-year-old Hadley Sullivan's life. Having missed her flight, she's stuck at JFK airport and late to her father's second wedding, which is taking place in London and involves a soon-to-be stepmother Hadley's never even met. Then she meets the perfect boy in the airport's cramped waiting area. His name is Oliver, he's British, and he's sitting in her row.

A long night on the plane passes in the blink of an eye, and Hadley and Oliver lose track of each other in the airport chaos upon arrival. Can fate intervene to bring them together once more?

Quirks of timing play out in this romantic and cinematic novel about family connections, second chances, and first loves. Set over a twenty-four-hour-period, Hadley and Oliver's story will make you believe that true love finds you when you're least expecting it.

At first I wasn't really so keen on picking up this book, but then I felt like reading a contemporary, and saw this on my shelf, so I picked it up.

When I finished reading, I couldn't believe that so much could happen in a span of 24 hours! This book exceeded my expectations, and I'm glad I picked it up. I can't really believe the plane romance though, cause I've never thought that could happen.

There were parts that I felt that Hadley was ranting too much, but the ending made up for everything else.

Even though I don't believe in love at first sight, I really enjoyed the book. It's a cute short story that had the ability to make me smile, laugh and tear up a bit, even though it was just in a span of 24 hours.

“Love is the strangest, most illogical thing in the world.

“What are you really studying?"
He leans back to look at her. "The statistical probability of love at first sight."
"Very funny," she says. "What is it really?"
"I'm serious."
"I don't believe you."
He laughs, then lowers his mouth so that it's close to her ear. "People who meet in airports are seventy-two percent more likely too fall for each other than people who meet anywhere else.”

“I can't believe you're here," she says, her voice soft. "I can't believe you found me."
"You found me first," he says, and when he leans to kiss her, it's slow and sweet and she knows that this will be the one she always remembers. Because while the other two kisses felt like endings, this one is unquestionably a beginning.”