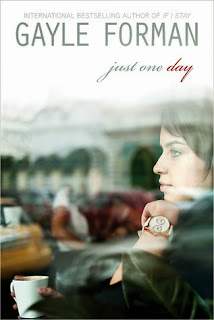 A breathtaking journey toward self-discovery and true love, from the author of If I Stay

When sheltered American good girl Allyson "LuLu" Healey first meets laid-back Dutch actor Willem De Ruiter at an underground performance of Twelfth Night in England, there’s an undeniable spark. After just one day together, that spark bursts into a flame, or so it seems to Allyson, until the following morning, when she wakes up after a whirlwind day in Paris to discover that Willem has left. Over the next year, Allyson embarks on a journey to come to terms with the narrow confines of her life, and through Shakespeare, travel, and a quest for her almost-true-love, to break free of those confines.

Just One Day is the first in a sweepingly romantic duet of novels. Willem’s story—Just One Year—is coming soon! 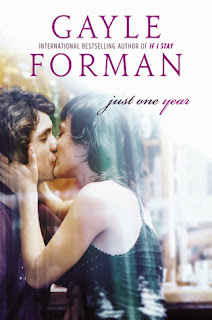 Before you find out how their story ends, remember how it began....

When he opens his eyes, Willem doesn’t know where in the world he is—Prague or Dubrovnik or back in Amsterdam. All he knows is that he is once again alone, and that he needs to find a girl named Lulu. They shared one magical day in Paris, and something about that day—that girl—makes Willem wonder if they aren’t fated to be together. He travels all over the world, from Mexico to India, hoping to reconnect with her. But as months go by and Lulu remains elusive, Willem starts to question if the hand of fate is as strong as he’d thought. . . .

The romantic, emotional companion to Just One Day, this is a story of the choices we make and the accidents that happen—and the happiness we can find when the two intersect.

Allyson and Willem's story started in the first book, Just One Day. A series of fortunate circumstances - serendipity, you might say - brought them together to spend an amazing day in Paris, and within twenty four hours, find love in one another.

To be honest, I was really hesitant to pick this up at first. I didn't really like the sound of Shakespeare in the synopsis. I only picked it up because of the endless gushing of bloggers and readers alike. I still can't say whether it was worth it or not.

On the first book, we got to see Allyson's side of the story. We got to see how she and Willem met, talked, and eventually went on a trip to Paris together. Before meeting Willem, Allyson was the shy goody-two-shoes, but then after just one day, everything changed and she became this whiny teenager that I really hated! It was like she wanted to inflict more pain to herself by thinking about crazy things. Because of this, I wasn't able to enjoy the first book so much. But then about the middle or so of the book, Allyson goes to college and meets Dee, which is the redeeming point. Of course, at first she was still a bitch, but then with the help of Dee, she finally puts herself together and stopped being the whiny teenager that I've come to hate so much. So thank you, Dee, for being that thing that salvaged the book for me, and for being one of the reasons why I continued on to the next book. I seriously couldn't connect with Allyson for the most part. By the time she stopped being a whiny teenager, I was already 65% through, and too late to convince me to like the book.

As I said, Dee was only one of the reasons. The second is that, I thought: Well, I got this far already! I couldn't just go on with another book without knowing Willem's side of the story! I felt a need to understand what really happened, so I dared to read the second book, and hoped that it would at least be a bit better than the first book.

Reading Willem's point of view is definitely a great change because I didn't have to deal with a whiny teenage girl anymore. It was refreshing, and it actually made me thankful for continuing on to the second book, despite not getting what the fuss was about the first book. Willem's POV definitely made things better, and I began to like the story. In Just One Year, we get to see what really happened that night in Paris. Why had he left Lulu, and had he tried to look for her? All things were answered in the second book and more. Willem's book is definitely the better of the two, and I even picked up a few wise words from him here and there. I really like the second book, which make me almost thankful for picking up the first one. Almost.

“And that's when I understand that I have been stained. Whether I'm still in love with him, whether he was ever in love with me, and no matter who he's in love with now, Willem changed my life. He showed me how to get lost, and then I showed myself how to get found.”

“What is the real question is not whether to be, but how to be?”

“Loving someone is such an inherently dangerous act. And yet, love, that’s where safety lives.”

“Sometimes fate or life or whatever you want to call it, leaves a door a little open and you walk through it. But sometimes it locks the door and you have to find the key, or pick the lock, or knock the damn thing down. And sometimes, it doesn’t even show you the door, and you have to build it yourself. But if you keep waiting for the doors to be opened for you... I think you’ll have a hard time finding single happiness,let alone that double portion.”

“Saba used to say there was a difference between bravery and courage. Bravery was doing something dangerous without thinking. Courage was walking into danger, knowing full well the risks.”

“Because you don’t ever find things when you’re looking for them. You find them when you’re not.”

“What's the definition of insanity? Doing the same thing over and over and expecting different results.”

“And something tells me if it matters, maybe it shouldn't be easy.”

“Because I understand all the ways of trying to escape, how sometimes you escape one prison only to find you've built yourself a different one.”