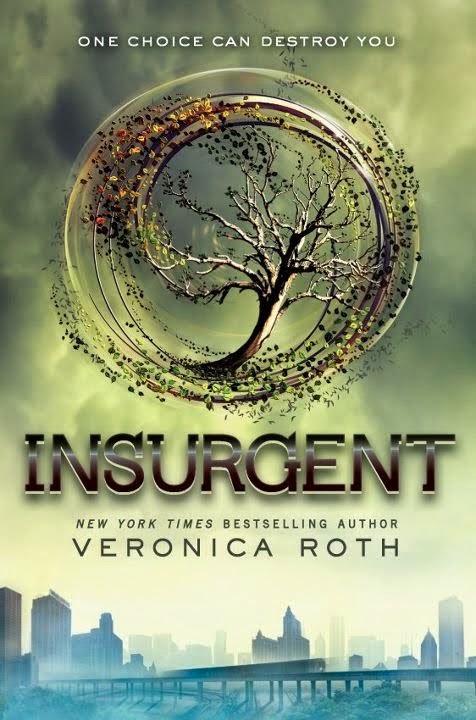 One choice can transform you—or it can destroy you. But every choice has consequences, and as unrest surges in the factions all around her, Tris Prior must continue trying to save those she loves—and herself—while grappling with haunting questions of grief and forgiveness, identity and loyalty, politics and love.

Tris's initiation day should have been marked by celebration and victory with her chosen faction; instead, the day ended with unspeakable horrors. War now looms as conflict between the factions and their ideologies grows. And in times of war, sides must be chosen, secrets will emerge, and choices will become even more irrevocable—and even more powerful. Transformed by her own decisions but also by haunting grief and guilt, radical new discoveries, and shifting relationships, Tris must fully embrace her Divergence, even if she does not know what she may lose by doing so.

I waited so long to read this one for the fear that I might be disappointed. As you can see from both my blog and Goodreads name, I am an avid fan of Divergent, the first book in this series. I loved the first book too much that I feared I would be disappointed by this one, but boy was I wrong! I loved this one, even though there were times that I felt like this was too action-packed. I was actually expecting action-packed, just not this much. And Tris was very annoying for the most part too. But, despite all that, I still can't help but give this five stars! I loved it! (Though I actually don't know why.)

I'm still not sure if I'm glad I waited so long to read this or not, but I can say that I loved this book. Probably not as much as the first book, but really close. I liked to enough to be able to say that the second book was not a disappointment and was able to live up to the amazing-ness of the first book.

This was an exciting and exhilarating book, and I couldn't put it down for even a second! I found myself constantly catching my breath because I was trying to follow the fast-paced action!

I'm so glad that I finally finally read this book, because I now know what the talk is about! But I guess the wait prepared me a lot too, so while I could have read this sooner, I think the wait made me enjoy the book even more. I'm just so glad that this one did not let me down, because what would I do with my blog name now, right? HAHA! :))

*I apologize, it was just so hard to write a coherent review of this one, because I was so afraid, and then so relieved, and all these feelings are just making my head so messy!

“People, I have discovered, are layers and layers of secrets. You believe you know them, that you understand them, but their motives are always hidden from you, buried in their own hearts. You will never know them, but sometimes you decide to trust them.”

“No matter how long you train someone to be brave, you never know if they are or not until something real happens.”

“Like a wild animal, the truth is too powerful to remain caged.”


“I’m not important. Everyone will do just fine without me,” I say.
“Who cares about everyone? What about me?”

“Insurgent, he says. Noun. A person who acts in opposition to the established authority, who is not necessarily regarded as a belligerent.”