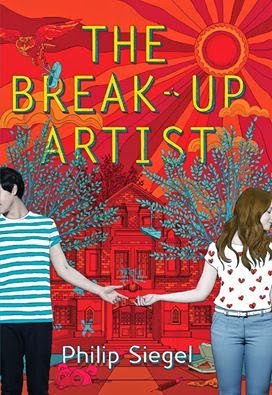 Some sixteen-year-olds babysit for extra cash. Some work at the Gap. Becca Williamson breaks up couples.

After watching her sister get left at the altar, Becca knows the true damage that comes when people utter the dreaded L-word. For just $100 via paypal, she can trick and manipulate any couple into smithereens. With relationship zombies overrunning her school, and treating single girls like second class citizens, business is unfortunately booming. Even her best friend Val has resorted to outright lies to snag a boyfriend.

One night, she receives a mysterious offer to break up the homecoming king and queen, the one zombie couple to rule them all: Steve and Huxley. They are a JFK and Jackie O in training, masters of sweeping faux-mantic gestures, but if Becca can split them up, then school will be safe again for singletons. To succeed, she'll have to plan her most elaborate scheme to date and wiggle her way back into her former BFF Huxley’s life – not to mention start a few rumors, sabotage some cell phones, break into a car, and fend off the inappropriate feelings she’s having about Val’s new boyfriend. All while avoiding a past victim out to expose her true identity.

No one said being the Break-Up Artist was easy.

The Break-Up Artist was compelling from the well-written synopsis to the pretty cover, so when I saw it on Netgalley, I immediately requested it, and I was ecstatic when I got approved. I mean, who wouldn't, right? The synopsis talks about a book that is both promising and original, and I couldn't want to read it!

The Break-Up Artist started out really great, with snark comments and originality that kept me amused, but as I read on, I started to feel like it was getting old, boring, and contradicting. The middle of the book was dragging, and I hated how annoying the main character was! I hated what she was saying, and I just wanted to smack her with something hard. She kept talking bad about love, then letting herself believe that she was in love with just a matter of days, and how she was with Huxley was just infuriating!

But, it wasn't that bad because I got through it somehow and managed to finished the book. I'm glad I did finish this, because I loved the ending! It was like everything wrapped up nicely and it was a really great ending!

Basically, this book had great a great beginning and ending, but really infuriating middle! I guess that kept the book to be in balance, that's why I'm giving it the middle of five stars, which is three. My expectations weren't met, though I kind of had big expectations of this one, but still. It was just hard getting through the middle part of the book. Maybe you guys should still give this a try though, because others seem to have loved it. I'm the odd one here, haha!