ARC Review: Me Since You 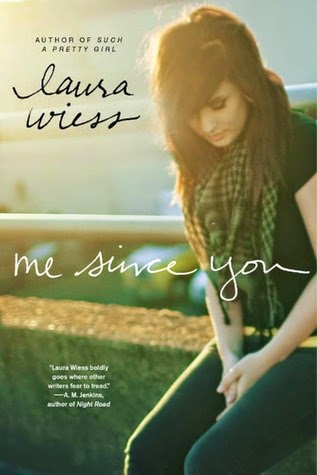 Laura Wiess captures the visceral emotion of a girl's journey from innocence to devastating loss and, ultimately, to a strange and unexpected kind of understanding--in this beautiful and painfully honest new novel.

Are there any answers when someone you love makes a tragic choice?

Before and After. That's how Rowan Areno sees her life now. Before: she was a normal sixteen-year-old--a little too sheltered by her police officer father and her mother. After: everything she once believed has been destroyed in the wake of a shattering tragedy, and every day is there to be survived.

If she had known, on that Friday in March when she cut school, that a random stranger's shocking crime would have traumatic consequences, she never would have left campus. If the crime video never went viral, maybe she could have saved her mother, grandmother--and herself--from the endless replay of heartache and grief.

Finding a soul mate in Eli, a witness to the crime who is haunted by losses of his own, Rowan begins to see there is no simple, straightforward path to healing wounded hearts. Can she learn to trust, hope, and believe in happiness again?

Sixteen-year-old Rowan Areno's life changes as she watches her father spiral deeper and deeper into depression. After failing to convince a man not to commit suicide with his newborn son, Rowan's dad, a police officer, blames himself. The depression hits, and after fighting a hard battle, her dad loses and commits suicide, leaving Rowan lost and disappointed. What's worse, he didn't even leave a note!

Me Since You is a book that I thoroughly enjoyed because of its uniqueness and how deeply I connected to it. Instead of starting the story after the suicide like most books would, Me Since You started from the very beginning and took me through the entire journey - the depression, how it was fought, the suicide, how it affected the ones left behind, and finally, the healing process. Laura Weiss possessed the ability to make the readers understand, and by doing so, took everyone in an emotional roller coaster ride.
During Rowan's healing process, she met Eli, who was also battling his own demons. I loved how Eli was not pushy at all, while being able to be there for Rowan. He gets Rowan's situation, even though his experience is not exactly the same. I loved how in finding solace with each other, Rowan and Eli were finally able to reconcile with their own tragedies.

This book holds a special place in my heart because I saw someone close to me fight the same battle, and I really felt a strong connection with the book and its characters. Everything just felt so real, and I commend Laura Weiss for writing about depression and suicide realistically and truthfully. It was truly a great read, and I recommend anyone who finds this interesting to give it a shot.