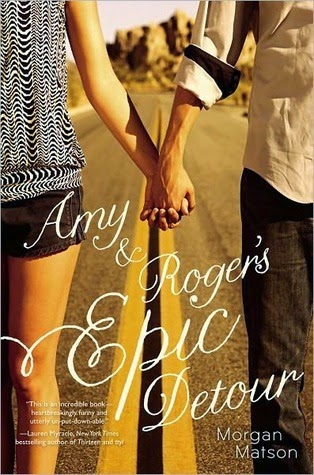 Amy Curry is not looking forward to her summer. Her mother decided to move across the country and now it's Amy's responsibility to get their car from California to Connecticut. The only problem is, since her father died in a car accident, she isn't ready to get behind the wheel. Enter Roger. An old family friend, he also has to make the cross-country trip - and has plenty of baggage of his own. The road home may be unfamiliar - especially with their friendship venturing into uncharted territory - but together, Amy and Roger will figure out how to map their way.

Amy has to drive across the country from California to Connecticut because her mom decided to do so after her father's death due to a car accident. The problem is, Amy is not driving because of the trauma after the accident. So her mom asks Amy's childhood friend Roger to drive Amy since he's going to Philadelphia anyway. The two start out as strangers, but after having a couple to detours, things change as they get to know each other more.

Amy and Roger's Epic Detour is a good book, but I believe that it has the potential to have been better. Mostly, the book was enjoyable, but there were certain parts wherein it felt dragging and boring, and I think that it could have done better in the feels department. Nevertheless, i still liked reading this one.

I really loved the scrapbook style the author used in the book. There were lots of great quotes within the book. I liked how the characters slowly came into realization of how they felt towards each other until they reached the end. Amy and Roger's road trip is not merely a road trip, but it was like the journey of life.

Amy and Roger's Epic Detour is easily the best road trip book that I have read yet, and I'm looking forward to reading more books by Morgan Matson!

“The best discoveries always happened to the people who weren't looking for them.”