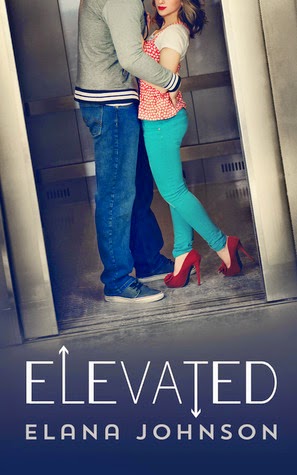 The last person seventeen-year-old Eleanor Livingston wants to see on the elevator—let alone get stuck with—is her ex-boyfriend Travis, the guy she's been avoiding for five months.

Plagued with the belief that when she speaks the truth, bad things happen, Elly hasn’t told Trav anything. Not why she broke up with him and cut off all contact. Not what happened the day her father returned from his deployment to Afghanistan. And certainly not that she misses him and still thinks about him everyday.

But with nowhere to hide and Travis so close it hurts, Elly’s worried she won’t be able to contain her secrets for long. She’s terrified of finally revealing the truth, because she can’t bear to watch a tragedy befall the boy she still loves.

When I first looked at the cover of Elevated and its synopsis, I immediately wanted to read the book! So when it became free on Amazon, I was extremely excited! Sadly, I was disappointed.

Elly Livingston has been avoiding her ex-boyfriend Travis, who lives in the same building as her. Because of this, she avoids riding the elevator and takes the stairs instead, for the fear of running into him. But when she can't get upstairs without using the elevator, and she gets stuck there with Travis because the elevator stopped due to the storm, they are forced to work things out.

When I read the book, I was really surprised that it was written in verse instead of prose, because I didn't see anything regarding that in the synopsis. Nevertheless, I continued reading the book. At first it seemed like it would be a promising read, but as I read on, I felt really disconnected to the characters and I slowly became disappointed.

It's not that I have anything against the story, it's not that. It's just that it felt like 'meh' to me. I did not hate it, but I did not like it either. I have no big complaints, but I have no compliments either. Really, I'm just stuck in the middle! I read it in one sitting though, so there's that. Aside from those, I think there's nothing more that I can say.