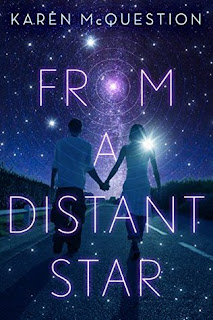 Seventeen-year-old Emma was the only one who hadn’t given up on her boyfriend, Lucas. Everyone else—his family, his friends, his doctors—was convinced that any moment could be his last. So when Lucas miraculously returns from the brink of death, Emma thinks her prayers have been answered.

As the surprised town rejoices, Emma begins to question whether Lucas is the same boy she’s always known. When she finds an unidentifiable object on his family’s farm—and government agents come to claim it—she begins to suspect that nothing is what it seems. Emma’s out-of-this-world discovery may be the key to setting things right, but only if she and Lucas can evade the agents who are after what they have. With all her hopes and dreams on the line, Emma sets out to save the boy she loves. And with a little help from a distant star, she might just have a chance at making those dreams come true.

I received an ARC copy of this book from the publisher through Edelweiss in exchange for an honest review. Everybody thinks that Lucas will die soon, except for Emma, his girlfriend. Out of desperation, Emma seeks the help of Mrs. Kokesh to provide her a potion to bring Lucas back from the dead. After doing what she was told to do, Lucas miraculously woke up and started to feel better, only now he's not like himself. Later on, the find out that an alien is inhabiting Lucas' body and Emma has to help him get back home so that she can get back the real Lucas.

I guess the pacing and the plot alright, and I also liked the friendship that formed between Emma and the alien. I just wished that there were more parts that showed Lucas since the whole thing was about getting him back. The book was centered on him, but he was barely there. Honestly, this was really weird alien book, but props to the author for the very unique plot.

I racked my brain for more things to say about this book, but I can come up with nothing to sway me to one side. I guess I just have no strong opinions about this book. Thus, I am giving this book 3 stars to stay in the middle.