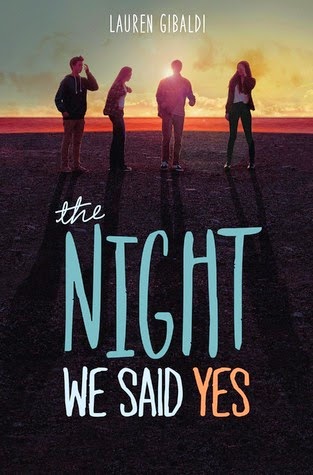 Before Matt, Ella had a plan. Get over a no-good ex-boyfriend. Graduate from high school without any more distractions. Move away from Orlando, Florida, where she’s lived her entire life.

And neither was attending a party that was crashed by the cops just minutes after they arrived. Or spending an entire night saying “yes” to every crazy, fun thing they could think of.

Then Matt abruptly left town, and he broke not only Ella’s heart but those of their best friends, too. So when he shows up a year later with a plan of his own—to relive the night that brought them together—Ella isn’t sure whether Matt’s worth a second chance. Or if re-creating the past can help them create a different future.

In alternating then and now chapters, debut author Lauren Gibaldi crafts a charming, romantic story of first loves, lifelong friendships, uncovered secrets, and, ultimately, finding out how to be brave.

Ella haven't seen Matt, her ex-boyfriend, since he disappeared on them a year ago. So when Ella goes to a party, she does not expect to see Matt there. Little does she know that Matt has planned to recreate the night that they met, which led to to a night of saying "yes".

The Night We Said Yes was a great book to start my year right (I read it on January 1st)! Told in alternating past and present chapters, The Night We Said Yes is a unique book that has a cute story. I really enjoyed this one, and despite never having experienced what the characters have experienced, I felt like I had a connection to them - even to the minor characters.

There may be times that the characters' reaction to events may be exaggerated, but I think that the author intended it that way. The alternating past and present point of views may have been quite confusing at times, but the vibe wouldn't be there had it been written otherwise.

I really loved the characters in this book! The main character, Ella, sticked by her friends all the time and proved to be a really great friend, constantly thinking about others. Matt, even having done all that he did, still is a great guy deep down. Meg, Ella's best friend, knew how to make decisions for herself, despite what others say. Jake, who may seem like a jerk on the surface, but actually cares about Meg and his friends deep down, even protecting them. Gabby, who stood by Ella's side and was really genuine. Lastly, Barker, who knew how to look out for his friends.

It was not hard at all to fall in love with this book, with characters that amazing and with an adventurous story. I truly enjoyed this one and hope that others would as well!