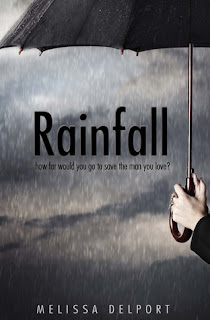 Paige’s father has Alzheimers, and her fiancé is shot and killed in an armed robbery. Paige fights her depression and pulls herself out of the dark place that she has succumbed to, with monumental effort and a new-found determination to live her life to the fullest, doing things that both terrify and exhilarate her.

When Paige meets Adam, the attraction is instantaneous. Adam grew up in an orphanage and has no recollection of his life before the age of six. Paige falls head over heels in love and embraces a happiness she never dreamed possible. Until the day she finds Adam in bed with another woman.

Wanting nothing more to do with him, Paige cuts Adam out of her life, until she receives a mysterious visitor, who reveals secrets about Adam's past that shock Paige to her very core.

Determined to fight for the man that she loves, Paige finds herself on a journey that will change her life forever.

Rainfall is a book that I really wanted to like, but sadly, that was not what happened. When I read the book, it felt like there were too many things crammed in the first 10% of the book that I wondered what would be left to tell. And since it was full of narration, it was like everything was just being "told" and not "shown."

The romance progressed too fast for my taste in this book. In the first 10% of the book, they were pretty much in love already, which I hated. I wouldn't have continued with this book were it not about Dissociative Identity Disorder. The only reason I had to continue was because I wanted to soak up every information I could about the disorder because I felt like it was really interesting and informative.

I think I liked the story alright, but I didn't like the writing style. I liked the plot and where the book was going, but I just didn't feel connected to the characters. There were also some transitions that didn't have chapter breaks, and I had a problem with those.

I started liking the book at around the last 5% or 10% of the book. Before that I yell and shake some sense into the main character at times. (view spoiler)

I've seen other people's reviews of this book and many of them seemed to like it. It's still worth giving a shot for that reason and for the great plot. I guess I'm just the bad sheep in this one.