Excerpt: The Fix by Natasha Sinel 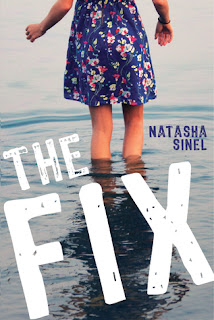 One conversation is all it takes to break a world wide open. Seventeen-year-old Macy Lyons has been through something no one should ever have to experience. And she’s dealt with it entirely alone. On the outside, she’s got it pretty good. Her family’s well-off, she’s dating the cute boy next door, she has plenty of friends, and although she long ago wrote her mother off as a superficial gym rat, she’s thankful to have allies in her loving, laid-back dad and her younger brother.

But a conversation with a boy at a party one night shakes Macy out of the carefully maintained complacency that has defined her life so far. The boy is Sebastian Ruiz, a recovering addict who recognizes that Macy is hardened by dark secrets. And as Macy falls for Sebastian, she realizes that, while revealing her secret could ruin her seemingly perfect family, keeping silent might just destroy her.

The Fix follows two good-hearted teenagers coming to terms with the cards they were dealt. It’s also about the fixes we rely on to cope with our most shameful secrets and the hope and fear that come with meeting someone who challenges us to come clean.

"First shot out of the gate, Sinel bravely addresses tough topics, demonstrating that the weight of secrets can pull us under––and their release can save us from drowning." —Holly Schindler, author of A Blue So Dark and Feral

“A bewitching, beautiful, and brave debut. Readers will marvel at Macy's resilience. Natasha Sinel's writing devastates and uplifts, by turns. An important story of one girl's journey to rewrite the blueprint of her own life by facing the truth inside herself.” —Carrie Mesrobian, award-winning author of Sex & Violence and Perfectly Good White Boy

"In her YA debut, Natasha Sinel paints a riveting picture of a teenager haunted by her past and struggling with her present. Macy's world is richly drawn, heartbreakingly real, and difficult to put down. The Fix shines." —I.W. Gregorio, author of None of the Above

Sebastian Ruiz got me thinking about things I’d wanted to forget forever. And then he disappeared.

Rumors were flying in the junior hallway. Even though Sebastian was a loner, his name suddenly took on celebrity status. He’d tried to kill himself. He’d OD’d. He’d been shipped off to military school.
He’d been kidnapped. If it had been anyone else, I would have thrown an alien abduction theory into the mix.

But it wasn’t someone else.

It was Sebastian Ruiz—who only a few days earlier had come to Rebecca’s party and had shaken me up like a long-forgotten snow globe and then walked away, leaving me to the impossible task of catching all the fluttering bits of false snow.

I hadn’t even wanted to go to Rebecca’s party. Hours before, I’d been sitting under the oak tree, flipping through my well-worn copy of UC Berkeley’s architecture program brochure. I stared at my favorite photo—six students enraptured by a professor with wild white hair and bushy eyebrows. If I squinted, the girl on the left with blondish-brown hair could be me.

“Don’t bail on me,” she said immediately.

I hesitated, trying to think of a good reason why I couldn’t go to her party. Every other Saturday, Rebecca’s mom worked the double-shift at the radio station. And that’s when we’d break out the sex, drugs, and good ol’ rock ’n’ roll. But that night, I just wasn’t in the mood.

Apparently, I’d hesitated too long, because Rebecca jumped on the silence.

“Listen, I can hear you wracking your brain for an excuse. You don’t have one. This is bullshit.”

“Seriously,” she said. “Jasmine can’t come, and there’s another guy coming, so it would be me and like seven guys.”

“What guy?” I asked. Fresh blood was rare. It was always the same group of eight to ten of us. The drama club stoners and me.

“He’s not a drama guy. Chris ran into him at the diner this morning and invited him.”

“Yeah,” I said, making sure my voice sounded normal. “He’s in my English class.”

I didn’t tell Rebecca that for the last few weeks during class, I’d been making eye contact with Sebastian more frequently and longer than was probably acceptable for someone with a boyfriend. I didn’t know what it meant. Nothing, probably. Just that we were both bored and happened to be looking up at the same moment. Or maybe not.

Mom poked her head out between the sliding doors, her face flushed from yet another marathon on the treadmill.

“Are you having dinner here?” Mom shouted across the yard.

She closed the door quickly, lest any air-conditioning escape.

“Okay.” I rolled up the Berkeley catalog and went around the house to the garage so I wouldn’t have to see Mom.

Hours later, I was on Rebecca’s porch with the regulars. Ryan and Tyler sat on the floor, their backs against the railing. They hooked up occasionally, and lately Tyler wanted more, but Ryan insisted he wasn’t gay. Tyler was holding back tears.

“That doesn’t even make sense,” he said. I knew what would happen next. Ryan would feel bad for hurting Tyler, he’d put his arm around him, and take him somewhere to “talk.”

Cody, Rebecca, and Salim sat on folding chairs at the small table in the corner, playing Never Have I Ever with shots of vodka. Matt straddled the beer cooler, drumming it with his hands to the beat of the music—something by some Broadway diva they were all obsessed with who’d recently gone solo.

Chris sat on the porch swing next to me, his arm stretched over my shoulders. He held a can of beer; I nursed a vodka cranberry. He waved a gnat away from us. Because I’d known Chris since birth, we didn’t have to talk much.

“Really?” Rebecca frowned at him. Cody was her ice cream, her spaghetti and meatballs, her wish upon a star. And every now and then, Cody would decide that she was his too.

Rebecca came over to the porch swing and squished herself between Chris and me. She put her hands in Chris’s thick blond hair and kissed him loudly on the cheek and turned to me and licked the side of my face.

“My two best friends. Together. Include me, please,” she said. “Come on—Cody’s done it. Let’s do it.”

Chris choked on his beer.

“But I love you guys,” she whined.

“And we love you,” I said as she stretched her body across us, her head in my lap and her legs on Chris’s.

She yawned, which made me yawn. It seemed like Sebastian wasn’t coming, and I didn’t want to admit to myself that I was waiting for him, so I began preparing an excuse to leave.

But right then Sebastian turned the corner onto Rebecca’s street, his hands deep in his jeans pockets.


Want to know more about the book?

Click this link tomorrow to read what happens after the excerpt above!