Blog Tour: The Weight of Feathers 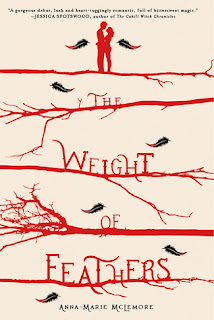 For twenty years, the Palomas and the Corbeaus have been rivals and enemies, locked in an escalating feud for over a generation. Both families make their living as traveling performers in competing shows—the Palomas swimming in mermaid exhibitions, the Corbeaus, former tightrope walkers, performing in the tallest trees they can find.

Lace Paloma may be new to her family’s show, but she knows as well as anyone that the Corbeaus are pure magia negra, black magic from the devil himself. Simply touching one could mean death, and she's been taught from birth to keep away. But when disaster strikes the small town where both families are performing, it’s a Corbeau boy, Cluck, who saves Lace’s life. And his touch immerses her in the world of the Corbeaus, where falling for him could turn his own family against him, and one misstep can be just as dangerous on the ground as it is in the trees.

Beautifully written, and richly imaginative, The Weight of Feathers is an utterly captivating young adult novel by a talented new voice. 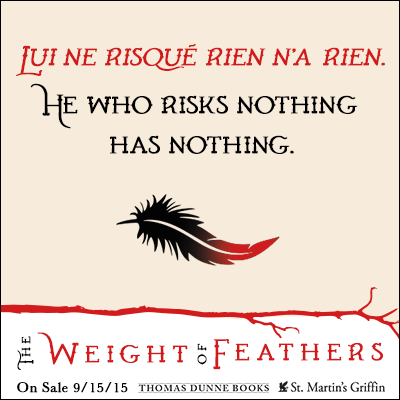 The pacing and progression of the book is just amazing. The build up to the end is commendable, and I almost finished this in literally just one sitting, except that I had to eat. I also liked the author's writing style - distinct and very beautiful. There's also this sense of mystery to it that just made me want to devour the book.

My favorite part from this novel, aside from the romance, is the way the author showed two sides of the feed between the two families. She was able to show that everything was just a understanding, at the same time their hate towards each other can be justified. I also love the root of all the problems because there was a sense of mystery to it. It was not that petty, but petty enough to prove a point.

I obviously was fascinated enough by the concept of the book to request it and join the blog tour, but since it's a forbidden romance novel, I never imagined that I would love it this much. The novel was captivating and full of intrigue. It's definitely one of the most unique books I've read, despite the cliche part - the forbidden romance.

“McLemore’s prose is ethereal and beguiling… The enchanting setup and the forbidden romance that blooms between these two outcasts will quickly draw readers in, along with the steady unspooling of the families’ history and mutual suspicions in this promising first novel.” —Publishers Weekly

“Readers beguiled by the languorous language—a striking mix of French and Spanish phrases, wry colloquialism, lush imagery, and elevated syntax—will find themselves falling under its spell. The third-person narration alternates between Lace and Cluck, doling out twists and building to a satisfying, romantic conclusion.” —Kirkus Reviews

“In this tale of magical realism, the magic is so deftly woven into the fabric of the story… Told with skillful poetic nuances, this Romeo-and-Juliet story of forbidden love will entice fans of Maggie Stiefvater’s Raven Cycle who wished for a little more romance.” —School Library Journal

“Anna-Marie McLemore's debut novel is a very imaginative modern-day romance akin to Romeo and Juliet and is infused with the whimsy of magical realism.” —RT Book Reviews

“An air of mysterious fantasy enshrouds the whole book, pulling the reader through it as if in a spell. McLemore is a writer to watch.”—The Guardian

“You've never read a love story quite like this one. Anna-Marie McLemore has created in entirely imaginative world and rich characters that will pull you in as if she's spinning magic herself.” —Bustle

“With prose as magical as its characters, The Weight of Feathers is an exciting debut.” —Paste Magazine