ARC Review: It's a Wonderful Death 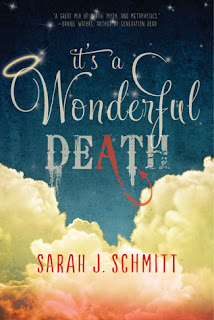 Seventeen-year-old RJ always gets what she wants. So when her soul is accidentally collected by a distracted Grim Reaper, somebody in the afterlife better figure out a way to send her back from the dead or heads will roll. But in her quest for mortality, she becomes a pawn in a power struggle between an overzealous archangel and Death Himself. The tribunal presents her with two options: she can remain in the lobby, where souls wait to be processed, until her original lifeline expires, or she can replay three moments in her life in an effort to make choices that will result in a future deemed worthy of being saved. It sounds like a no-brainer. She’ll take a walk down memory lane. How hard can changing her future be?

But with each changing moment, RJ’s life begins to unravel, until this self-proclaimed queen bee is a social pariah. She begins to wonder if walking among the living is worth it if she has to spend the next sixty years as an outcast. Too quickly, RJ finds herself back in limbo, her time on Earth once again up for debate.

RJ is a snarky, unapologetic, almost unredeemable, very real girl. Her story is funny and moving, and teens will easily connect with her plight. Prepare to meet the Grim Reaper, who’s cuter than you’d expect; Hawaiian shirt–wearing Death Himself; Saint Peter (who likes to play Cornhole); and Al, the handler for the three-headed hound that guards the gates of Hell. This cast of characters accompanies RJ through her time in the afterlife and will do their best to gently shove her in the right direction.

It's a Wonderful Death is by far the best book I've read about heaven and hell and there wasn't even romance in it! For those people who know me, you should know that I rarely read books that contain no romance at all, and it's even rarer that for me to like those books. Clearly, this book is an exception.

It's a Wonderful Death is about a girl named RJ who was mistakenly collected by a Grim Reaper when it was not time for her death yet. RJ, a queen bee in her school who was used to getting what she wants, demanded her case be heard and so a tribunal was convened. RJ was tasked to revisit three points in her life where she could alter her life for the better. If she could do this, then she would be returned to Earth. If not, she would stay in between heaven and hell while she waits for her actual time of death.

It's a Wonderful Death is an amazing eye-opening book about how our actions not only affect our lives and the lives of the people we know, but also those that we don't know. It also taught me that the smallest changes in our actions can cause really big difference to their outcomes. It made me realize that I should really think about my actions more since I might affect people that I didn't think I would. This book made me want to change for the better not because of the concept of going to heaven, but because I saw how good being kind to someone in need made RJ feel.

I really commend Sarah Schmitt for this amazing novel that is full of meaning. It deserves to be read by everyone and I hope that more people will read this and be enlightened by it as well.