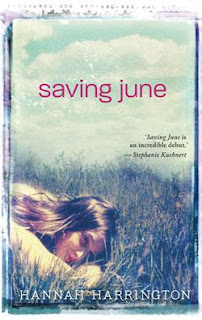 ‘If she’d waited less than two weeks, she’d be June who died in June. But I guess my sister didn’t consider that.’

Harper Scott’s older sister has always been the perfect one — so when June takes her own life a week before her high school graduation, sixteen-year-old Harper is devastated. Everyone’s sorry, but no one can explain why.

When her divorcing parents decide to split her sister’s ashes into his-and-her urns, Harper takes matters into her own hands. She’ll steal the ashes and drive cross-country with her best friend, Laney, to the one place June always dreamed of going — California.

Enter Jake Tolan. He’s a boy with a bad attitude, a classic-rock obsession and nothing in common with Harper’s sister. But Jake had a connection with June, and when he insists on joining them, Harper’s just desperate enough to let him. With his alternately charming and infuriating demeanour and his belief that music can see you through anything, he might be exactly what she needs.

Except June wasn’t the only one hiding something. Jake’s keeping a secret that has the power to turn Harper’s life upside down — again.

For unknown reasons, Harper's perfect sister June committed suicide without leaving a note, leaving Harper confused. Harper started to go through June's things and found out that she may not have known June all too well. After being reminded how her sister always wanted to study in California, Harper decided to go on a road trip to spread her ashes where she belongs. And so, with her best friend Laney and the the mysterious boy Jake who showed up on her sister's funeral, they take a van to California.

Saving June is the most meaningful road trip book I've read yet, since road trip books can usually be uneventful. I really enjoyed most parts of this book, but there were some parts that I just skipped over because I was anxious to get to the end. I have to admit though, there were parts with so much feels! I liked how this book discussed suicide, however I feel like there are other books that did a better job. This one was good, but it could have been better.

I really liked Harper and Laney's friendship because I saw how they were always there for each other, without expecting anything in return. I liked how by going on a journey to "save June", Harper also somehow found herself. I liked the friendship the three of them formed, and how willing Jake was to help Laney. It reminded me that there are still some good people in the world, and I should learn to be one of them.

I thought that it was true what her Aunt Helen was saying; that Harper was selfish for leaving her mother just like that when she just lost her daughter, but I can understand why she did it. There were parts where it seemed like Harper didn't care, but I think she was just too good in repressing her feelings. I didn't like how this book ended too abruptly. I get that it was supposed to be an open ending, but the ending felt more like a comma rather than a period to me. I felt like there should be a little more after the ending, and also, more information about Jake and June, and also the consequences of their road trip.

Overall, I liked the book, but I didn't really love it. It was great, but it was a few notches short of what I was expecting.