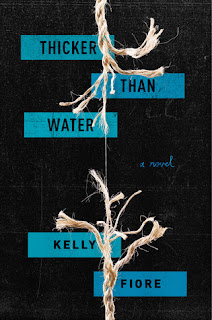 Cecelia Price killed her brother. At least, that’s what the police and the district attorney are saying. And although Cecelia is now locked up and forced into treatment, she knows the real story is much more complicated.

Cyrus wasn’t always the drug-addled monster he’d become. He was a successful athlete, but when an injury forced him off the soccer field and onto pain medication, his life became a blur of anger, addiction, and violence. All CeCe could do was stand by and watch, until she realized one effective way to take away her brother’s drugs while earning the money she needed for college: selling the pills.

Soon, CeCe becomes part drug dealer, part honor student. But even when all she wants is to make things right, she learns that sometimes the best intentions lead to the worst possible outcome.

Thicker than Water is an unforgettable dark, harrowing look into the disturbing truth of drug addiction and the desperate love of a sister watching her brother deteriorate before her eyes.


"Regret forces us to relieve the moments we hate the most - the moments that drove us into spiraling downfalls, the moments where we stopped living and started surviving."

When I first read the synopsis of Thicker Than Water, I was really curious about it but I didn't really want to read it because I feared that it would clash with my morals and I wouldn't be able to fully appreciate it. I initially didn't want to request it, but I saw that many others wanted to read it as well, so I decided, why not request it as well? I'll just see if I get approved or not. And then I got approved by HarperCollins, and gosh, am I so thankful for it!


"Sometimes we have to start living the lives we never expected to live. Other times we pick up where one life left off. In the end, it's not about where you came from, but where you're going."

Thicker Than Water is such an amazing book filled with meaning, honesty and a unique journey. For me, it showed a very realistic and honest story. I don't know what it's like to have a family member who is a drug addict, but it just felt so real to me. It wasn't just realistic, it was real. Of course when I got finished the book and read the author's note, everything made sense - the author indeed is telling the truth because she has experienced this herself.


"Sometimes the picture you paint is more important than the life you're living."

Aside from it being very real, what I really liked about the book is the author's writing style. My gosh! The words that Kelly Fiore used to string those sentences made even the most meaningless ones meaningful. The best part? Everything seemed natural, not forced or poem-like, but it definitely sounded melodic. I wanted to highlight everything, even if it didn't mean anything.

I really liked the story and how everything progressed and unravelled, even though Thicker Than Water is not like anything that I've ever read before. I also liked how the main character, Cecilia, never once sounded juvenile, despite being the right to because she is in fact still a teenager. She never once became whiny and always owned up to the consequences of her actions. For that, I admire her.


"When we have to jump, we take a deep breath, close our eyes and count to three."

I seriously did not expect to love this book as much as I did, but surprise, surprise! I loved the story and the author's writing style! I really recommend this very real book filled with honesty and lots of beautiful quotes.