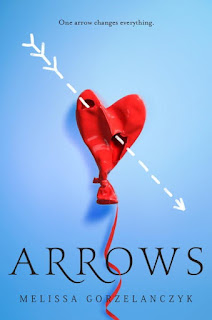 A modern cupid story set in present-day Wisconsin combining the fantastical elements of Greek mythology with the contemporary drama of MTV's Teen Mom.

People don’t understand love. If they did, they’d get why dance prodigy Karma Clark just can’t say goodbye to her boyfriend, Danny. No matter what he says or does or how he hurts her, she can’t stay angry with him . . . and can’t stop loving him. But there’s a reason why Karma is helpless to break things off: she’s been shot with a love arrow.
Aaryn, son of Cupid, was supposed to shoot both Karma and Danny but found out too late that the other arrow in his pack was useless. And with that, Karma’s life changed forever. One pregnancy confirmed. One ballet scholarship lost. And dream after dream tossed to the wind.

A clueless Karma doesn’t know that her toxic relationship is Aaryn’s fault . . . but he’s going to get a chance to make things right. He’s here to convince Danny to man up and be there for Karma. But what if this god from Mount Olympus finds himself falling in love with a beautiful dancer from Wisconsin who can never love him in return?

This fast-paced debut novel explores the internal & external conflicts of a girl who finds herself inexplicably drawn to a boy who seemingly doesn't reciprocate her  feelings, touching on the issues of love, sex and responsibility, with a heroine struggling to control her destiny--perfect for fans of Katie McGarry's novels and MTV’s 16 and Pregnant.

When I first read the synopsis for this novel, I was immediately intrigued. Greek myth is a guilty pleasure of mine, and having reading Cupid books like this on Wattpad, I knew that this book would be for me. Indeed, Melissa wrote a promising novel with an intriguing plot.

Back when Aaryn was younger, he was sent down to Earth. He was tasked to shoot Karma and Danny, but only managed to shoot Karma, leaving the relationship in shambles. Now the Assembly has found out about this, and Aaryn is once again sent to Earth to fix the mistake he made - by making Danny propose - or be punished. But how can Aaryn do this, when he has fallen for Karma himself?

In this story, we see the repercussions of an action made by another to Danny and Karma’s relationship. And despite having a daughter together, Danny still isn’t loyal to Karma. I really enjoyed seeing the bonds of friendship and family in this book. Karma’s immediate family was portrayed as helpful, but not perfect, which I really liked. On the other hand, her aunt and cousin were very supportive, which I don’t see in much other novels. The story also showed how much of a good mom Karma is, but how she keeps lying to herself to keep things the way they are.

Enter Aaryn. Aaryn is this helpful guy who just keeps popping up everywhere. Little does Karma know that he is the one at fault for her shitty relationship. As their friendship started to develop, their relationship becomes more complicated. At some points, I was really annoyed at Aaryn, but now I can’t remember at which exact points. Overall though, he’s a really great guy who just wants what’s best for Karma.

I really like the flow of the story - I liked the plot and the pacing. It was very interesting and it was entertaining to read. However, the reason why I couldn’t give this one more stars is because first, I felt like the overall tone of the novel is kind of juvenile and amateur-ish. I’m not saying that about the character, the plot or the whole story - just maybe the choice of words. Second, I felt like the ending was kind of rushed. Aaryn was in Mount Olympus one moment and then on Earth the next, and I was just left open-mouthed because it was too fast and I hoped that the explanation would be longer. I also felt that I was left hanging because of the ending.


Overall, I really liked the flow of the plot in Arrows, I just didn’t just didn’t like the ending and choice of words.