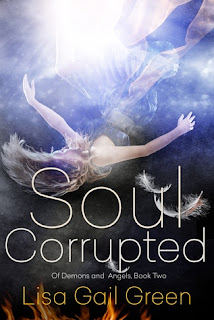 In Soul Corrupted, the sequel to Soul Crossed, life in Heaven isn’t all "happily ever after" for Josh and Grace. Now Guardian Angels, they are entrusted with finding and saving the next potential Antichrist. But Grace is consumed with worry about her family, which is dealing with the aftershocks of her death. She's particularly concerned about her brother Noah, who has turned down a dangerous path of drugs and violence—and she's frustrated by the rules of Heaven, which forbid her from contacting them.

Josh has troubles of his own. A former Demon, he questions his ability to guide troubled souls to the light. When he discovers that Noah made a deal with Lucifer and has even been hanging around with Josh’s old Demon pal, Keira, he makes a forbidden counter-deal with the Devil to save Noah's soul. Josh's side of the bargain? He has to sever his relationship with Grace.

Josh and Grace's world is about to spin out of control, testing the limits of true love and blurring the border between Heaven and Hell.

Soul Corrupted is the second installment in Lisa Gail Green’s Of Demon and Angels series, which started with Soul Crossed.

I was given an ARC copy of this book via Edelweiss in exchange for an honest review. This review is a review of the ARC copy, not the final version.

Of Angels and Demons is a very unique story with a great plot. However, I didn't think that it was executed well enough. From the first book, I've been hooked by the idea of the book, but not actually by the book itself. Unlike the first book, there were no grammatical or typographical errors in this one, but I still enjoyed the first book more.

I don't know if it's because I'm getting older or something, but I somehow felt that this book is more juvenile in comparison to the first book. There were numerous times when I rolled my eyes at the characters, and I sometimes wanted to bump their heads into each other.

To be honest the plot of this book is really great. It's very interesting and unique at the same time, however it lacks that factor that would just grab at the readers to keep on reading. I have to admit that I want to read the third book because of the ending, but I want there to be something like that throughout the whole book as well and not just the ending.

I'm not sure if I'm going to read the third book still. To be honest, for now, I don't feel like reading it, but I do want to find out what happens. Maybe if I can find a detailed summary of the book, then I guess that would be fine for me.