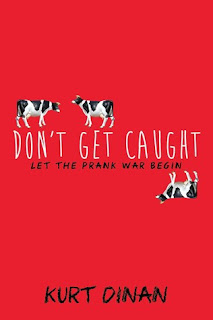 When Max receives a mysterious invite from the untraceable, epic prank-pulling Chaos Club, he has to ask: why him? After all, he's Mr. 2.5 GPA, Mr. No Social Life. He's Just Max. And his favorite heist movies have taught him this situation calls for Rule #4: Be suspicious. But it's also his one shot to leave Just Max in the dust...

Yeah, not so much. Max and four fellow students-who also received invites-are standing on the newly defaced water tower when campus security "catches" them. Definitely a setup. And this time, Max has had enough. It's time for Rule #7: Always get payback.

I have to admit that when I started reading Don't Get Caught, I thought it would be just another book about stupid teenagers set on revenge. However, when I finished the book, not only was I entertained, but I learned a lot of things as well. Something people should know about me is that I rarely like books without romance in it, which goes a long way in proving how amazing this book is for me to have given it 4.5 stars.

Don't Get Caught is about how a prank bought 5 people, who mostly never talked before, together to exact revenge on the ones who pulled a prank on them. Our main protagonist is Max, who uses this opportunity to reconstruct himself. Through their brainstorms, we see how smart Max is, and how he grew from being timid to being an independent individual who didn't let others and the norm dictate what he should do.

Don't Get Caught is one of the most entertaining reads I've read in a long time. This book is full of pranks pulled by Max's group, the Water Tower 5. Though I never laughed out loud, it was just entertaining to watch everything unfold. Something I really liked about this is how there's also a little bit of mystery amid the pranks, and there were two bombs revealed in the end *wink wink* One is something that I kind of expected, and the other was totally unexpected for me.

Also, I really love how Max grew in this novel. From a timid kid, he slowly gained confidence because of the pranks that they pulled. Yes, he did some questionable things in the book, but it was all part of his growth process. Max showed how smart he is, and how loyal he is to the ones he considers as friends. He's also compassionate in a way that he doesn't want to hurt others in the process of them going after the Chaos Club.

Another thing I really liked is how the author didn't just completely focus on Max, but was also able to focus on each character and let their own personalities exude. And my gosh, one of the best things about this book is how the author, through Wheeler's character, showed that anyone could change for the better, given enough encouragement. I love how the author showed that, because characters like Wheeler who always fails classes are usually portrayed as hopeless or is ridiculed by everyone. On the other hand, varsity players, like Adleta, are usually shown as jerks, but in this book, Adleta is actually pretty cool. Even before being friends with the other 4, Adleta didn't act like he was better than everyone else, like the stereotype of jocks in most books. Ellie is the daughter of religious parents, but has a rebellious streak in her. Malone is the amazing, talented artist who also had amazing growth in this book.

In short, this book is so much more than just teenagers who pulls numerous pranks on the school. This book has so much meaning, while also providing a lot of entertainment. This book is definitely a must-read!