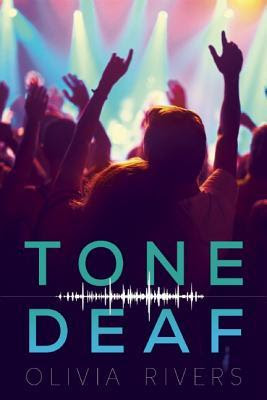 His world is music. Her world is silent.
Ali Collins was a child prodigy destined to become one of the greatest musicians of the twenty-first century—until she was diagnosed with a life-changing brain tumor. Now, at seventeen, Ali lives in a soundless world where she gets by with American Sign Language and lip-reading. She’s a constant disappointment to her father, a retired cop fighting his own demons, and the bruises are getting harder to hide.

When Ali accidentally wins a backstage tour with the chart-topping band Tone Deaf, she’s swept back into the world of music. Jace Beckett, the nineteen-year-old lead singer of the band, has a reputation. He’s a jerk and a player, and Ali wants nothing to do with him. But there’s more to Jace than the tabloids let on. When Jace notices Ali’s bruises and offers to help her escape to New York, Ali can’t turn down the chance at freedom and a fresh start. Soon she’s traveling cross-country, hidden away in Jace’s RV as the band finishes their nationwide tour. With the help of Jace, Ali sets out to reboot her life and rediscover the music she once loved.

"Am I better off speaking in silence,
Or screaming so loud no one will hear?
I fake a smile,
But it's killed by you,
I fake a soul,
But that dies, too.
So I fake my life,
What else can I do?"

Ah, Tone Deaf. At only 24% of the novel, you have already managed to get me teary-eyed, and that’s a feat that cannot be done by many. To top that off, I have absolutely no luck with boy-band novels and road trip novels, so I wasn’t actually supposed to request you. But then, my stupid brain had to tell me to do so, so I did, and it’s the best stupid thing I’ve ever done.

"So I'll wait for you to figure out how to love."

I became an avid reader precisely because of books like this. Every year, I read so many books, trying to find books that would make me feel, and Tone Deaf did just that. Ah, not enough words in the English language could ever justify my love for this novel, but I would try anyway because it’s been a while since I’ve felt this way. And although I cannot put “this” into words, I can assure you that “this" nothing but amazing.

I don't think there has ever been a book who has made me laugh out loud with tears still in my eyes. This book is just too special! A lot of the things mentioned in the book are thoughts that run through my head every day and a lot of their issues are also my issues. I feel like this book understands me, instead of the other way around.

Gosh, the things that Ali and Jace went through are things that no one should ever go through, and I feel so much for them. On so many levels, I can relate to both of the characters, which makes this book so close to my heart. Everything is just so meaningful for me, and I just love these characters with all my heart. Even though both Ali and Jace have been treated badly by life, they still managed to be happy in those moments. Of course, what makes this book realistic is how not every moment is a happy one.


"When life's tumbling down, down, down,
And nothing's there when you look up,
Except the innocence you let life corrupt."

Killer and Arrow's relationship is just goals! I love how they tease each other, but cannot be completely mad at each other for long. I love that amid the heavy issue discussed in this novel, the author was able to include a gay couple. Ugh, I just love these two so much that I wish they were real people that I could meet! Actually, I wish that of everyone in the band plus Ali and Avery.

Since I have mentioned Avery, let's just discuss for a while how completely loyal she is to Ali. Tone Deaf is her favorite band, but when after what Ali went through initially, she completely supported Ali. Through everything, Avery was there for Ali. But again, what makes this realistic is how Avery doesn't completely understands Ali in the way that only Jace can, because they have been through similar things.

"I could cry about it, but I've lost enough tears over him."

And let's not forget Jon! Jon is such a huge contradiction. He looks intimidating with all his tattoos, but he's actually scared of talking to girls. He also has a soft spot for Cuddles. Jon teaches us not to judge people by their outer appearances. Jon teaches us to give everyone a chance because everyone deserves it.

This book is a book that will always hold a special place in my heart. It's true to life, and every bit of it is meaningful. I love this book with all my heart, and the feeling that I had while reading this is just priceless. Gosh, I am so thankful for reading this book right now, when I am struggling to come to terms with life's bitchiness. Thank you, Olivia Rivers, for giving me this gem to hold onto.

"Yeah, I was young, and yeah, there probably wasn't anything I could do about it. But ... what if there was? What if I could have stopped it, what if I'd tried harder, what if I just wasn't strong enough?"

Seriously guys, just read this book not just because it deserves to be read, but also because you guys all deserve to read an amazing book such as Tone Deaf.