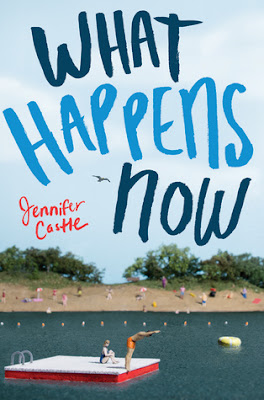 
"I know what it is to want something so badly, you feel like your cells aren’t properly bonded together without it.
I also know what it’s like to get that something.
And honestly, I’m still not sure which is worse..."

Ari Logan is battling to win her war against depression and the dark night she hurt herself on purpose. It’s not easy: her best friend is drifting away, her mom’s emotionally checked out, and she spends her days playing caregiver to her handful of a half-sister, Danielle. But it’s summer, and anything is possible...

That’s when Camden Armstrong steps onto the beach of Ari’s local swimming lake.

At first, Ari quietly longs for Camden from afar, seeing in him everything she wants to be. When the two discover a true connection the following summer, Ari lets herself fall not just for the quirky and self-assured Camden but also his friends, tumbling into their world of independence, adventure, and shared sci-fi fandom. As Ari’s romantic dreams come true, she must unlock the mysteries of the very real and troubled boy behind her infatuation, while also struggling with her own demons, obligations, and loyalties.

From the award-winning author of "The Beginning of After" and "You Look Different in Real Life," "What Happens Now" is a touching, insightful novel about learning to heal, learning to love, and what happens when fantasy becomes reality.

What Happens Now is so much different than what I expected it to be. I thought that it was going to be a dark tale about depression and cutting, but turns out that it's not. It's much lighter than that, although that's not to say that it doesn't mention those things. But actually, I think that I prefer it this way.

What Happens Now is different from most YA contemporary romance because it delves into the serious stuff about relationships, where they fight about things that matter in relationships. Most other books have couples who often fight just because of some misunderstanding or something similarly unimportant. In this book, Camden and Ari talked about the fact that there should be a give and take in their relationship. I really admired how they actually talked about things to each other, instead of making the other just guess. Well, Camden sometimes did, but Ari always talked to him whenever that happens.

What Happens Now features a lot of relationships, such as an old friendship, new friendships, mother-daughter, sister-half sister, and daughter-stepfather. It was actually quite surprising to see how Ari was closer to her stepfather rather than her mom, and it's a welcome one because most YA would feature characters who hate their stepfathers. However, Ari has a rocky relationship with her mom, mostly I think because they just don't have the same "language" of things, so they get what the other is trying to convey.

The only thing that I didn't really like with this book is the fact that it has a not-so-solid beginning and ending. The beginning weirded me out a little, and I was completely thrown of by it. Because of the beginning, I thought this was going to be another book just focused on the main character's relationship with a boy. The ending, on the other hand, felt inadequate to me. I didn't feel a sense of closure, and as I said, they always talked things through in their relationship, so I felt disappointed that they didn't do so in the end. I just felt like there was something lacking.


But actually, with this book - and this is the first time ever that I am going to say this - I think I would have preferred it if they didn't get back together. Ari had a lot of progress and realizations after they broke up, and I thought this might be a book about how you could love someone, but know when they might be wrong for you, so you just have to let go of that, even if they helped you become a better person. But in a way, I'm also glad that they ended up together, because in the end Camden was also able to realize his mistake.


Overall, What Happens Now is a great and quick read. I wouldn't really classify it as a light read - although I did mention that it's lighter than what I expected it to be - because it tackles a lot of things, which you have to read this book to find out. So yes, I do encourage you to read this book. I know that it might not be for everyone, but I really liked reading it.