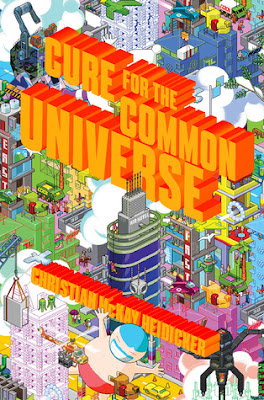 
Sixteen-year-old Jaxon is being committed to video game rehab . . .

ten minutes after he met a girl. A living, breathing girl named Serena, who not only laughed at his jokes but actually kinda sorta seemed excited when she agreed to go out with him.

In rehab, he can't blast his way through galaxies to reach her. He can't slash through armies to kiss her sweet lips. Instead, he has just four days to earn one million points by learning real-life skills. And he'll do whatever it takes—lie, cheat, steal, even learn how to cross-stitch—in order to make it to his date.

If all else fails, Jaxon will have to bare his soul to the other teens in treatment, confront his mother's absence, and maybe admit that it's more than video games that stand in the way of a real connection.

Prepare to be cured.

I have one very big problem about this book, and it's the ending. Aside from that very big problem, however, I have no other complaints about this book. I mean, come on, video game rehab! Enough said! Cure for the Common Universe is such a unique and fun book to read, while showing us the main character's quest towards self-discovery.

"Just because something goes wrong in your life doesn't mean you get to become the wrong in everyone else's."


I really enjoyed reading this book. Jaxon was committed to video game rehab by his dad for spending hours and hours playing video games, and there, Jaxon has to earn 1 million points to be released. Since Jaxon met this girl Serena right before he was committed, he would do anything in order to get that one million points in time for their date, which is in four days! Because Jaxon was focused on this goal, he pushed people, used them, and became incredibly selfish.

I really like the fact that this book was able to show how someone can be so selfish and yet never realize it. It shows that while being selfish, there may be people - like soup - to feed (no pun intended) that selfishness, making us not aware of it. People come off as trying to help, and that's just what they're doing, but it only makes people not realize that they're being selfish because it's offered to them. And what Jaxon did was just take and take, without even properly viewing Soup as a human being, or as an equal. Meeki gave him shit for being selfish, but Jaxon only viewed it as someone getting in his way.

I really like how unique Cure for the Common Universe is. From introducing a fun video game rehab facility, to the amazing characters, to featuring a main character that you would just love to hate, I think the author did a magnificent job. Man, I would love to see this book as a movie! Just imagine seeng the video game rehab center! I think a lot of people would enjoy it too.

However, as I said in the beginning, my issue with this book is the ending. I felt like it didn't give justice to the story. I felt like it ended abruptly, and I felt like I was left hanging. There were still so many questions I had that were left unanswered, and I was just staring at the book in the end because I couldn't believe that that was already the ending. I need more!

Other than the ending, however, I don't have any other complaints about this book. It's an amazing book, and one I think everyone should read. It's a quick and easy read, it's also not heavy, but it carries along a strong message that everyone needs to hear. I highly recommend everyone to read this.