ARC Review: We Were Never Here by Jennifer Gilmore 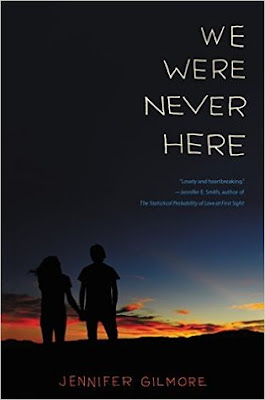 In this exquisitely written, emotionally charged young adult debut, Jennifer Gilmore explores the bond that is formed between a hospitalized girl and the secretly troubled boy she falls in love with.

Did you know your entire life can change in an instant?

For sixteen-year-old Lizzie Stoller that moment is when she collapses, out of the blue. The next thing she knows she’s in a hospital with an illness she’s never heard of.

But that isn’t the only life-changing moment for Lizzie. The other is when Connor and his dog, Verlaine, walk into her hospital room. Lizzie has never connected with anyone the way she does with the handsome, teenage volunteer. However, the more time she spends with him, and the deeper in love she falls, the more she realizes that Connor has secrets and a deep pain of his own . . . and that while being with him has the power to make Lizzie forget about her illness, being with her might tear Connor apart.

When I first saw this book on Goodreads, I really thought that it would be one of those books where my opinions would differ with everyone else's. So despite seeing the not-so-high ratings in Goodreads, I still requested this. However, I have to say that the others were right about this book from the start.

The premise of this book just seemed so interesting to me when I first read the synopsis. According to the synopsis, it's about a romance between a hospitalized girl and a troubled boy, which just sounded so interesting! I also saw a review that mentioned that this has mental illness in it, so of course I was interested. However, this book is more about pining away for someone who is not there rather than a romance that would make you feel the feels.

Let me just say this - I hated Connor's character. He's a chronic liar who thinks that the world revolves around him. I get that he's depressed but I don't think that's an excuse for being pathetic. Speaking of depression, I hate the way it was portrayed in this book. I know that it's not the center of the story, but seriously. Connor was not given the help that he needed, which just resulted to him being worse. He was continuously sent away, but not to get help. Ugh!

Also, there was no chemistry whatsoever between Connor and Lizzie. I didn't feel anything, which might also be caused by how few the time they spent with each other were. Which brings me to the point of insta-love because they've only seen each other a few times and they were already in love with each other. Nope, I just couldn't stand it.

Another thing I didn't like was how the characters interacted with each other. The conversations between Stella B. and Lizzie felt so awkward and chopped, and I just really didn't like it. It was also the case sometimes with Connor. Sometimes there would be one-word replies, which were just weird and awkward in my opinion.

Overall, I really didn't enjoy this book. In fact, it took me almost a week just to finish reading this because there was just nothing to hold me onto the book. In this case, I should have listened to what everyone else was saying.