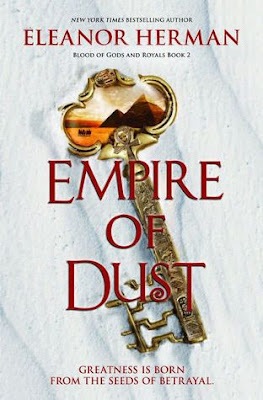 In Macedon, war rises like smoke, forbidden romance blooms and ancient magic tempered with rage threatens to turn an empire to dust

After winning his first battle, Prince Alexander fights to become the ruler his kingdom demands—but the line between leader and tyrant blurs with each new threat.

Meanwhile, Hephaestion, cast aside by Alexander for killing the wrong man, must conceal the devastating secret of a divine prophecy from Katerina even as the two of them are thrust together on a dangerous mission to Egypt.

The warrior, Jacob, determined to forget his first love, vows to eradicate the ancient Blood Magics and believes that royal prisoner Cynane holds the key to Macedon's undoing.

And in chains, the Persian princess Zofia still longs to find the Spirit Eaters, but first must grapple with the secrets of her handsome—and deadly—captor.

New York Times bestselling author Eleanor Herman entwines the real scandals of history with epic fantasy to reimagine the world's most brilliant ruler, Alexander the Great, in the second book of the Blood of Gods and Royals series.

This pains me so much because this is just not me, but dnf at 57%

I received a copy of Legacy of Kings last year and I was so happy to read it. I was really very interested in the story of Alexander the Great, especially his teenage years. I also really loved the fact that Eleanor Herman is a historian, so even though this has a dash of fantasy with it, the accounts would mostly be true to history. However, I didn't really like it because there were too many POVs. As such, the whole story arc is just actually really short. At the end of the book, I was so unfulfilled because I felt like the events were still too few.

When I received a copy of Empire of Dust for review, I literally screamed with joy because I thought I would finally get the story that I so wanted to know more of. However, it turns out that I have the same problem with this one as I did the first book. Still, there are so many POVs and still, at 57%, there is nothing truly interesting going on. It still feels like I'm in the first few chapters of the book, instead of being past the middle.

One thing you guys should know about me is that I rarely dnf a book. I think the number of books I've dnf-ed in my entire life amounts to less than 10 books. However, it just so happens that I really have a lot of things on my plate now and this is just not cutting it. I've been reading this book for days and days already, and I just don't have the patience right now to sit through it again (since it already happened in the first book).

I might get back to reading this one once I have more free time because honestly, this is a really interesting story. It's very unique and it would be a waste not to know what happened. I think that this book truly has the potential to be amazing. It's just that it's at a much slower pace than I prefer.