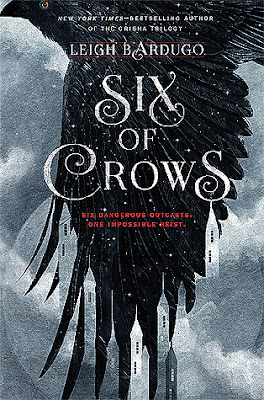 Ketterdam: a bustling hub of international trade where anything can be had for the right price—and no one knows that better than criminal prodigy Kaz Brekker. Kaz is offered a chance at a deadly heist that could make him rich beyond his wildest dreams. But he can't pull it off alone...

A convict with a thirst for revenge.

A sharpshooter who can't walk away from a wager.

A runaway with a privileged past.

A spy known as the Wraith.

A Heartrender using her magic to survive the slums.

A thief with a gift for unlikely escapes.

Kaz's crew are the only ones who might stand between the world and destruction—if they don't kill each other first.

“No mourners. No funerals. Among them, it passed for 'good luck.”


Oh my goodness, why didn't I read this book sooner? From the moment I read the synopsis for this book, I knew I wanted to read it. It screams of adventure and excitement, and indeed those were what I got. No wonder a lot of people are raving about this book!


“You love trickery."
"I love puzzles. Trickery is just my native tongue.”

My favorite thing about Six of Crows is how it focuses on the plot rather than anything else - such as the characters or background or overly descriptive events - but still manages to let us know the characters and the world well. I don't say this of many books, but I'm actually glad that this book didn't focus on the romance aspect of each character; instead, they were just a side plot. In most cases, multiple POVs with that many characters don't work for me, but with this one the plot still flowed seamlessly.

“Many boys will bring you flowers. But someday you'll meet a boy who will learn your favorite flower, your favorite song, your favorite sweet. And even if he is too poor to give you any of them, it won't matter because he will have taken the time to know you as no one else does. Only that boy earns your heart.”


I believe that Six of Crows is the type of book to be savored, instead of devoured. It's something that's meant to be read slowly, instead of quickly because of its intricately woven plot. The heist is a complicated and high-risk job, but with the skill set of the thieves and Kaz's crazy plans, they entered the battlefield. And can I just say, I still don't know if I love or hate Kaz's keeping things from the rest of the crew? He's such a complex character, and I want to know more!

“We are all someone's monster.”


All the characters in this novel are very interesting, even those who didn't have chapters for them. They were portrayed in such a manner that made me want to know all of them personally - even Rollins and Van Eck, actually. Kaz is of course the most complex character of all, but they all are equally complex, with a lot of secrets and tricks up their sleeves. I'm really interested in Jesper's story, though!

“Greed may do your bidding, but death serves no man.”


In the end, it has been bomb after bomb dropped, so I really cannot wait to read the next book! I can't wait to see what happens next; what this band of criminals have up their sleeves. The book is enjoyable, exciting, exhilarating and entertaining, so obviously, it's not hard to fall in love with it. This is my first Leigh Bardugo book, and I have to say that I am now a fan!

“I will have you without armor, Kaz Brekker. Or I will not have you at all.”