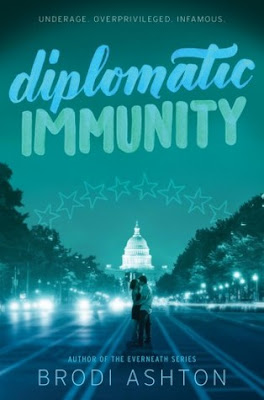 Aspiring reporter Piper Baird decides to write a scathing exposé on the overprivileged students at an elite Washington, DC, school, only for her life to change when she begins to fall for the story's main subject, in this new realistic contemporary romance from Brodi Ashton, the author of the Everneath trilogy.

Piper Baird has always dreamed of becoming a journalist. So when she scores a scholarship to exclusive Chiswick Academy in Washington, DC, she knows it’s her big opportunity. Chiswick offers the country’s most competitive prize for teen journalists—the Bennington scholarship—and winning will ensure her acceptance to one of the best schools in the country.

Piper isn’t at Chiswick for two days before she witnesses the intense competition in the journalism program—and the extreme privilege of the young and wealthy elite who attend her school. And Piper knows access to these untouchable students just might give her the edge she’ll need to blow the lid off life at the school in a scathing and unforgettable exposé worthy of the Bennington.

The key to the whole story lies with Rafael Amador, the son of the Spanish ambassador—and the boy at the center of the most explosive secrets and scandals on Embassy Row. Rafael is big trouble—and when he drops into her bedroom window one night, asking for help, it’s Piper’s chance to get the full scoop. But as they spend time together, Piper discovers that despite his dark streak, Rafael is smart, kind, funny, and gorgeous—and she might have real feelings for him. How can she break the story of a lifetime if it could destroy the boy she just might love?

When I first read the synopsis for Diplomatic Immunity, I was really excited. I felt like this would be a unique story because of the journalism factor in YA, and I also knew that there would be romance between Piper and Rafael. I kind of expected there to be a hint of mystery as well, and I just sounded so interesting to me. However, I was disappointed by this book.

Piper Baird is the type of character that I hate reading about in young adult novels that I read. There are some parts when she sounded like a naive little kid, and then some part where she sounded her age, and yet some other parts like an old person. I just thought that it was confusing and robotic at some points that I just couldn't bring myself to connect with her. I felt like the narrative was awkward, and the flow was not natural.

In terms of Rafael, on the other hand, he acts and talks like someone older than he is. Correct me if I'm wrong, but these two characters are just in high school, right? So I don't know how he gets away with everything that he does, even if he has diplomatic immunity. I just felt like the characters weren't acting like their actual ages.

This is a unique and interesting book, but it just didn't capture me as much as I thought it would. However, its saving grave is the last few chapters of the book, where I finally connected with the story. The romance aspect of the last part was written so beautifully, and I can really feel what the character experienced, especially with that Post-Anon post. I just wish that the rest of the book could have been like that section, and then I surely would have loved this book!

Overall, this book was just not what I was expecting. I didn't really connect to the main characters and the story until the last part, and by then it was too late for me to like this book. It is a unique story, but it lacks something.