ARC Review: The Possibility of Somewhere by Julia Day {4.5 Stars} 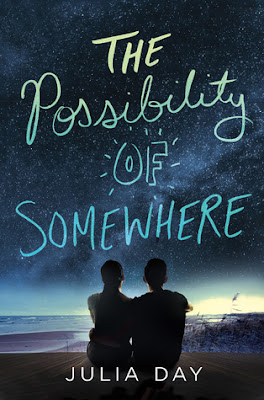 Together is somewhere they long to be.

Ash Gupta has a life full of possibility. His senior year is going exactly as he’s always wanted-- he's admired by his peers, enjoying his classes and getting the kind of grades that his wealthy, immigrant parents expect. There's only one obstacle in Ash's path: Eden Moore—the senior most likely to become class valedictorian. How could this unpopular, sharp-tongued girl from the wrong side of the tracks stand in his way?

All Eden's ever wanted was a way out. Her perfect GPA should be enough to guarantee her a free ride to college -- and an exit from her trailer-park existence for good. The last thing she needs is a bitter rivalry with Ash, who wants a prized scholarship for his own selfish reasons. Or so she thinks. . . When Eden ends up working with Ash on a class project, she discovers that the two have more in common than either of them could have imagined. They’re both in pursuit of a dream -- one that feels within reach thanks to their new connection. But what does the future hold for two passionate souls from totally different worlds?

I was given a copy of this book by St. Martin's Griffin
through Netgalley in exchange for an honest review.

Oh my goodness, this book definitely took me by surprise in such an amazing way! I have to honest, I didn't think much of this book when I first requested it because I have been having a bad streak with smart/high GPA main characters lately, but this one definitely salvaged that trope for me. I'll try to get into what I want to say quickly, but no promises!

Okay so most people are probably tired of the old cliché where the couple hates each other at first and then gets into a relationship with each other but I've always loved the tension that love/hate relationships brought. I just didn't know how much I've missed them before reading this book, and this book definitely brought back my desire to read such books. Another old cliché in this book is where the characters have to hide their relationship because the parents and friends don't approve. I thought that I was tired of this, but for a time this has been avoided since it has become cliché, and I think I kind of missed it. So yeah, definite plus points for this book!

When I finished like 10% of this book, I immediately knew that I was going to love it. It made me feel so giddy, and I couldn't help but smile while I was reading the book, even though I was in public and people probably thought that I was crazy. It just made me feel light and fluffy, and all the amazing things that I look for in a contemporary romance novel, and I just freaking loved it!

I really connected with the main character and the story. There were also a couple of times where I got teary eyed because I just felt everything the main character was feeling. I definitely got the frustrations on her part, and I was really able to put myself in her shoes. In some ways, I felt like we were very similar, and in some ways the opposite. I really admire Julia Day's ability to just make the reader feel every emotion that the main character is going through.

For a fluffy contemporary book, this book was sure filled with drama. A lot of things happened throughout the novel, and although I consider this book fluffy, there were some hardcore stuff going on with the main character's family. In my opinion, that aspect was not delved into much, which I kind of preferred because I'm tired of the cliché.

I really admire Eden because she's such a strong, independent woman. She stands on her own two feet and is not afraid to voice out her opinions. She went through a lot but she never complains. To add to that, she takes matters into her own hands and makes the best out of the situation that she's in. She worked hard for what she wanted and never expected help from anyone. I really think that Eden is someone to look up to, and I feel like I actually already do. I just felt like I should be more like her and start taking matters into my own hands.

This novel definitely made me feel all the feels, and that's both the good feels and the bad feels. I don't know if I'm making sense, but that made sense in my head haha! Overall, I really enjoyed reading this book. I think I really missed the old clichés, and it's also a way for me to break from the new clichés. I recommend this book for those who love relationships that start with the couple hating each other, because I promise you, feels!