ARC Review: A List of Cages by Robin Roe {5 STARS} 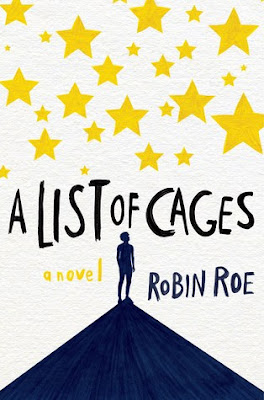 When Adam Blake lands the best elective ever in his senior year, serving as an aide to the school psychologist, he thinks he's got it made. Sure, it means a lot of sitting around, which isn't easy for a guy with ADHD, but he can't complain, since he gets to spend the period texting all his friends. Then the doctor asks him to track down the troubled freshman who keeps dodging her, and Adam discovers that the boy is Julian--the foster brother he hasn't seen in five years.

Adam is ecstatic to be reunited. At first, Julian seems like the boy he once knew. He's still kind hearted. He still writes stories and loves picture books meant for little kids. But as they spend more time together, Adam realizes that Julian is keeping secrets, like where he hides during the middle of the day, and what's really going on inside his house. Adam is determined to help him, but his involvement could cost both boys their lives.

"When I was little, I never wondered how I'd do it. I just knew one day I would go everywhere. But when you get older, you realize wanting is not the same as having. There are all those places you want to go, but it doesn't mean you can actually get there."


A List of Cages is one of the most heartbreaking books I've ever read. When I first read the synopsis of this book, I didn't think that the descriptions would be so vivid and realistic. As someone who is an advocate for mental health, the premise of the story immediately drew me in. However, I wasn't prepared for the emotions that it would make me feel. So just for anyone who is planning to read this book, get your heart ready.

"I wish I had the ability to talk to people like that. Talking is a talent; he probably doesn't realize it, but it is."


A List of Cages is told from two perspectives - Adam, a senior with ADHD whom everyone loves, and Julian, an orphan freshmen who lives with his uncle. Julian is someone who is experiencing something that no kid should experience, but sadly is a reality to many - child abuse. It's a harrowing tale of something that could happen to anyone but we wouldn't want to happen.

"Because when you're between two shores and no one can see you, you don't really exist at all."


Honestly, I didn't think that I would like this book a first because it was slow to start, and the tone was very somber. It brought down my mood even though not much was happening yet. But the emotions it brought me towards the latter half of the book felt so real that I couldn't help but appreciate it. It shows that reality of the world that we avoid discussing, but is really there.

"Eventually, all the tears are gone, and I'm empty, but it's a good sort of empty. Like I'm lighter."


My favorite thing about this book is how realistic it is. First, Adam is not some perfect guy who is loved by everyone and cares about Julian. At times, like when he hurt Charlie for seemingly constantly choosing Julian over him, he can be clueless. Second, Charlie was jealous of Julian at first, but when he knew Julian, he started to warm up to him. This book shows that human beings are not perfect. That despite trying our best to understand the world, there would always be times when we are clueless and miss things that we should notice.

"I used to think struggle was what aged you, but if that were the case, Julian should've been a hundred years old. Now I wonder if the opposite is true. Maybe instead of accelarating your age, pain won't let you grow."


On the other hand, this book also shows that the world is full of kindness. We just have to dig deep within ourselves to find it. Right from the start, Emerald warmed up to Julian, even though he seemed to be "intruding" in their circle of friendship. Charlie, towards the end, also started really caring for Julian, wanting to protect him, and visiting him in the hospital. Julian, who has been through so much, after being hurt beyond imaginable, still has so much kindness in him for other people. (Just writing this is making me emotional.) It kind of makes me rethink what I'm doing with my life.

"Hate ricochets, but kindness does too."


This book has made me feel a rollercoaster of emotions that I didn't think I could feel. Too often it's easy for people to be judgmental just because we don't know what it's like to be in another person's shoes. This book shows that despite it being part of our instincts, we should; because people are going through so much, and each of us has our own problems to face. We just have to remember that every time we meet people.

"But why can't good things feel like forever? It was all so fast ... before they left. I want to spin it back... slow it down. Why is time like that? Why does it slow down in the places you don't want it to, but it speeds away when you're happy?"


I think this definitely is a book that everyone should read at least once in their lives. Yes, it's kind of a sad book, but it's also a book that filled me with so much hope. I have no complaints about this book whatsoever. Just remember to be ready for heavy emotions when you read this one, but I definitely recommend it!