ARC Review: The Last of August 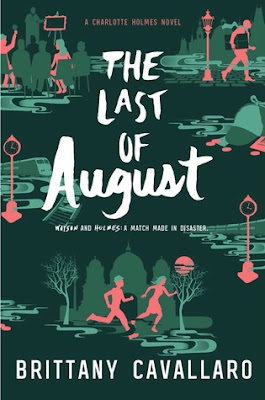 In the second brilliant, action-packed book in the Charlotte Holmes trilogy, Jamie and Charlotte are in a chase across Europe to untangle a web of shocking truths about the Holmes and Moriarty families.

Jamie Watson and Charlotte Holmes are looking for a winter break reprieve in Sussex after a fall semester that almost got them killed. But nothing about their time off is proving simple, including Holmes and Watson’s growing feelings for each other. When Charlotte’s beloved uncle Leander goes missing from the Holmes estate—after being oddly private about his latest assignment in a German art forgery ring—the game is afoot once again, and Charlotte throws herself into a search for answers.

So begins a dangerous race through the gritty underground scene in Berlin and glittering art houses in Prague, where Holmes and Watson discover that this complicated case might change everything they know about their families, themselves, and each other.

When I saw The Last of August, I debated whether or not to request it for review. I thought that the first Charlotte Holmes book was just so-so, and because I don't have much time to read anymore, I didn't know if it would be worth my time. However, I'm really thankful that I decided to request this because it turned out to be even better than the first book.

There's just something about The Last of August that's captivating and addicting. I had a lot of homework at the time that I read this, but I couldn't put it down for too long because I was always thinking about what might happen next in the story. I felt like I needed to know everything soon, and it kept me at the edge of my seat. I felt like the book had this sort of power over me so that it's always on my mind.

The thing that keeps me from giving this book 5 stars is because there were some things that weren't clear to me. I felt confused most of the time, but because it was addicting, I continued reading even if things were not 100% clear. I don't know if it's because I just couldn't keep up or the story just wasn't really clear enough, but there were times when I couldn't connect the dots. This happened especially near the end, when there was a rush of things that happened. As a result, I felt like I didn't get a proper ending.

I don't know why, but I don't think I will be reading the next book, if ever there will be one. I just don't think the story flows well from one book to another. I mean, the cases they work on are interesting, but in terms of the overall picture of the two main characters' relationship, nothing has changed. They're still in that weird state of being in between enemies, friends and lovers. I mean I kind of get Charlotte, but sometimes she just really gets on my nerves.