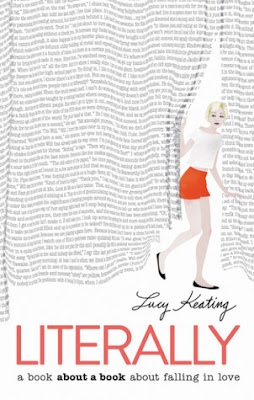 A girl realizes her life is being written for her in this unique, smart love story that is Stranger Than Fiction for fans of Stephanie Perkins.

Annabelle’s life has always been Perfect with a capital P. Then bestselling young adult author Lucy Keating announces that she’s writing a new novel—and Annabelle is the heroine.

It turns out, Annabelle is a character that Lucy Keating created. And Lucy has a plan for her.

But Annabelle doesn’t want to live a life where everything she does is already plotted out. Will she find a way to write her own story—or will Lucy Keating have the last word?

The real Lucy Keating’s delightful contemporary romance blurs the line between reality and fiction, and is the perfect follow-up for readers who loved her debut Dreamology, which SLJ called, “a sweet, quirky romance with appealing characters.”

When I first saw the synopsis for Literally, I was excited. I think a bookworm would be immediately attracted to what the story is about, because after all, it's about a main character in an author's story. However, it wasn't like I imagined it to be, and I felt like there were too much ambiguities.

From this point everything that became weird for me because why would an author be in her own novel? If she's writing the character, shouldn't it have been impossible for them to meet? And why was Annabelle the only one out of all the character to notice the inconsistencies within the novel, and the only one to notice the TK signs? I mean, it's just all hard to grasp when you're reading about it, which is why I think this would have done better as a movie.

For the first half of the book, I really felt confused. However, at the latter part of the book, that when I started enjoying. I liked the message that the author was trying to get across, and there were lots of good quotes in the book. I also started enjoying when she finally decided to choose between Will and Elliot, and how she chose the one I was rooting for, haha!


"And just because something ends, doesn't mean it didn't mean anything. Sometimes, you have to take the risk."


"You can't expect anything real or awesome to happen to you, if you don't take a chance."


"The end is up to you now, Annabelle. You'll find your Happy Ending, and it's not about whom you end up with. I am only just beginning to figure that out."


"I don't do this because it was my plan; it was my plan because I love it. But I'm determined no to stick to it too closely. I have no idea what surprises the future will hold. Now my plan is to follow my dreams. My plan is to surprise myself, and write my own story. I hope, whatever age you are, each one of you chooses to do the same."

Overall, I was really confused about this book at first but grew to love it when I learned the message of the novel. It's a quick and fun read that helped me pass my time, and after all the confusion, it was kinda entertaining and enjoyable as well.