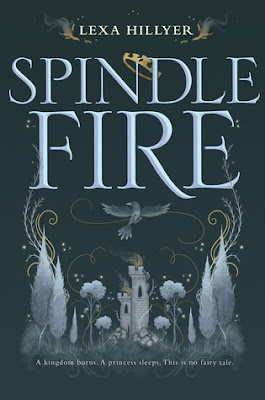 Half sisters Isabelle and Aurora are polar opposites: Isabelle is the king's headstrong illegitimate daughter, whose sight was tithed by faeries; Aurora, beautiful and sheltered, was tithed her sense of touch and her voice on the same day. Despite their differences, the sisters have always been extremely close.

And then everything changes, with a single drop of Aurora's blood--and a sleep so deep it cannot be broken.

As the faerie queen and her army of Vultures prepare to march, Isabelle must race to find a prince who can awaken her sister with the kiss of true love and seal their two kingdoms in an alliance against the queen.

Isabelle crosses land and sea; unearthly, thorny vines rise up the palace walls; and whispers of revolt travel in the ashes on the wind. The kingdom falls to ruin under layers of snow. Meanwhile, Aurora wakes up in a strange and enchanted world, where a mysterious hunter may be the secret to her escape . . . or the reason for her to stay.

Spindle Fire is the first book in a duology.

Spindle Fire is a retelling of Sleeping Beauty, except in this one she has an illegitimate sister and it includes faeries instead of fairy godmothers. It also had a teeny tiny element of Hansel and Gretel in using things to mark a path. Although based on Sleeping Beauty, the author has taken great lengths to make this book unique, at the same time stayed true to the gist of the original fairy tale.

I have such conflicting feelings about Spindle Fire. When I started reading it, I was so hooked that I didn't understand why it had such low ratings on Goodreads. However, as I read on, I felt kind of bored. I felt like the narrative was too long and excessive for my liking, so it caused me to skip chunks of text because I felt impatient. It also was not able to hold my attention because I felt bored. It was only when I reached 70% of the book that I started becoming invested in it. It did salvage my thoughts and rating for this book, but it was already too late for me to love the novel. And then the novel ended with a cliffhanger; not that I have anything against cliffhangers, but it just left so many things unresolved. In fact, I don't think it resolved any of my questions at all. So yeah, conflicting feelings. (Sorry this paragraph is long af.)

Despite that long ass complaint, there are some things I loved about the story. The plot is intricately woven and extremely well thought out. I liked the parallelism between Isbe and Aurora, and Balceour and Malfleur. I think that a lot of thought was put out into the story before even writing it to make everything that happened possible in a sense that it would all tie together and make sense. I also really appreciated how it took the story of Aurora to a whole new level, even adding all these characters that made this book more complex as I originally thought it would be.

Overall, I liked the plot, but the pacing was kind of slow. The ending left me wanting for more, but that's kind of conflicting because I also felt like none of my questions were answered. I'm definitely curious about what the next book would bring, but if you make me choose between reading the book and a summary, I would definitely choose the later. In short, my feelings about this book are so confusing because they're polar opposites.

What did you guys think about this book? I'm really, really curious!