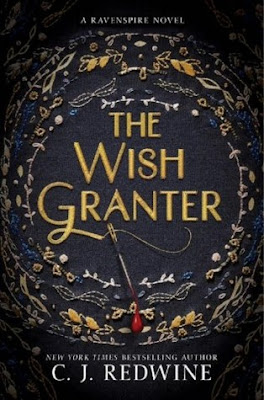 An epic, romantic, and action-packed fantasy inspired by the tale of Rumpelstiltskin, about a bastard princess who must take on an evil fae to save her brother’s soul, from C. J. Redwine, the New York Times bestselling author of The Shadow Queen. Perfect for fans of Graceling and the Lunar Chronicles.

The world has turned upside down for Thad and Ari Glavan, the bastard twins of Súndraille’s king. Their mother was murdered. The royal family died mysteriously. And now Thad sits on the throne of a kingdom whose streets are suddenly overrun with violence he can’t stop.

Growing up ignored by the nobility, Ari never wanted to be a proper princess. And when Thad suddenly starts training Ari to take his place, she realizes that her brother’s ascension to the throne wasn’t fate. It was the work of a Wish Granter named Alistair Teague who tricked Thad into wishing away both the safety of his people and his soul in exchange for the crown.

So Ari recruits the help of Thad’s enigmatic new weapons master, Sebastian Vaughn, to teach her how to fight Teague. With secret ties to Teague’s criminal empire, Sebastian might just hold the key to discovering Alistair’s weaknesses, saving Ari’s brother—and herself.

But Teague is ruthless and more than ready to destroy anyone who dares stand in his way—and now he has his sights set on the princess. And if Ari can’t outwit him, she’ll lose Sebastian, her brother…and her soul.

When I read the synopsis for this book, I was really surprised. I thought that Ravenspire #2 would be a continuation of The Shadow Queen, and I even stated in my review of that book how I excited I was to see how the story of the two kingdoms would unfold. It turns out that I was wrong about this being a continuation of where The Shadow Queen left off, but I still requested it because I think Rumplestiltskin retellings are rare. However, I must say that I was disappointed in this book.

I know that I shouldn't be comparing this to The Shadow Queen, but I can't help but do it. Compared to the first book, this book was really boring. I didn't feel the need to finish the book because the story was not that compelling. The events were not exciting enough, and the climax of the book fell flat for me. I felt like it dragged on and on, and it took me a long time to finish the book.

I also felt like the romance was not well developed. It was as if there were no other choices for Ari, because Sebastian is the only guy she is friends with, aside from her brother Thad. In a way, it felt forced and was very predictable.

On the other hand, what I liked about this book was how it focused on family instead of the romance. And unlike other books that focus only on parents, this book focused on sibling love. Ari and Thad were really close, and the whole reason that there's a story to tell in the first place is because Thad wanted to protect Ari at any cost. I also like how they both have different strengths, how they both acknowledge it, and how they work together to achieve their goals. I also like how they would work to any extent, just to save each other.

I also really like Ari's friendship with Cleo and Sebastian. Although she may be the princess of her kingdom, she forms friendships with those in the working class. And although Ari doesn't like mingling with other royals, she has the ability to command them with her words.

Overall, this book fell flat, especially when compared to the first book in the series. There are certain aspects of the book that I love, but the overall story was boring. I really like the concept of the story, however the execution was not that great.